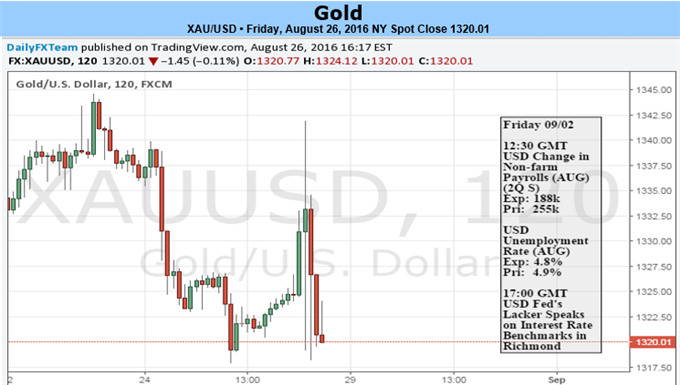 Gold prices are lower this week with the precious metal down 1.34% to trade at 1324 ahead of the New York close on Friday. The move comes on amid a fresh batch of central bank rhetoric with officials continuing to suggest that the door remains open for a September rate hike. Still, our outlook for gold remains unchanged with the technicals leaving room for a move lower before resumption of the broader uptrend.

Remarks made by Fed Chair Janet Yellen at the Jackson Hole Economic Symposium on Friday fueled a sharp recovery in gold prices (which were at the weekly lows) as the she noted that the central bank remains on pace to begin normalization in the months ahead. The rally quickly faltered however as the U.S. Dollar strengthened and stocks softened. On balance, the comments saw little change in the outlook for interest rates with Fed Fund Futures still pricing the first material expectation for a rate hike to be in December (slight uptick in the probability post-Yellen).

Heading into next week, greater emphasis may surround the August U.S. Non-Farm Payrolls report as market participants continue to gauge the outlook for the next Fed rate hike. Indeed on Friday Federal Reserve Vice Chairman Stanley Fischer stated that, “We’ve had very strong hiring reports in the last three months,” and incoming labor data, “will probably weigh on our decision, along with other data that may come in.” In light of the recent rhetoric emanating from the economic symposium, a strong employment report may boost expectations for a 2016 rate hike as Chair Yellen argues the, “case for an increase in the federal funds rate has strengthened in recent months.” From a technical standpoint, the risk remains for further losses near-term before mounting a more significant rally. 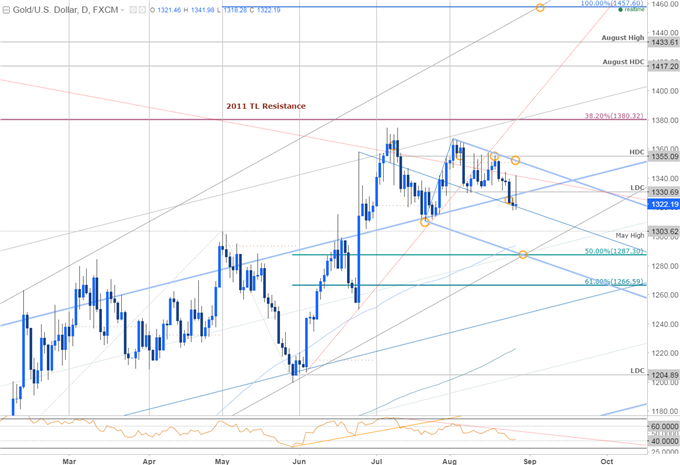 The broader outlook remains unchanged from last week. We’ve been tracking the gold trade closely on SB Trade Desk and heading into next week the focus remains lower while below the monthly open / high-day close at 1350/55. A descending pitchfork formation extending off the June highs has continued to guide price action with precision with prices looking to close the week just above the median-line.

Note that bullion is coming off long-term trendline resistance extending off the 2011 record highs and a break below the median-line targets subsequent support targets at 1303 and 1287- are of interest for possible short-exhaustion / long-entries. From a trading standpoint, if we close the week just above support, look for a possible rebound early next week to fade with a move into structural support to offer more favorable entries. Ultimately we’re looking higher in gold with a breach above near-term downtrend resistance targeting 1380. Continue to track this trade and more throughout the week on SB Trade Desk.