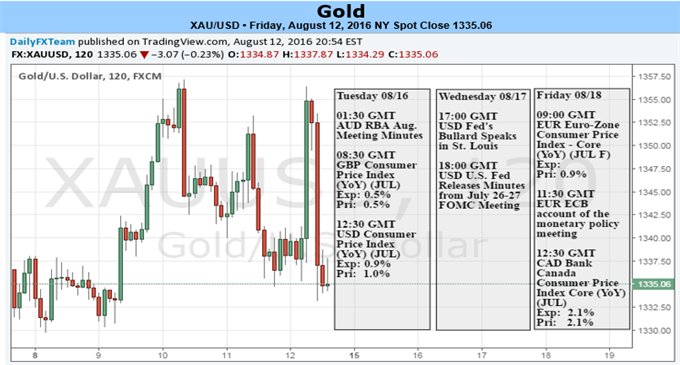 Gold prices ended the week fractionally higher with the precious metal advancing just 0.1% to trade at 1337 ahead of the New York close on Friday. The advance comes alongside strength in U.S. equities with all three major indices closing at record highs on Thursday. The greenback has also been on the defensive with the U.S. Dollar Index (ticker: USDOLLAR) lower by 0.2%. While the broader outlook remains weighted to the topside for gold, it’s unclear as to whether or not the correction off the July highs has run its course and we’ll be looking to key data next week to set the tone.

Advanced retail sales figures released on Friday missed estimates with a flat read for the month of July and although there was an upward revision to the June figures, the print bucks a three month winning streak for private consumption. University of Michigan surveys were also weaker with 1-year inflation expectations falling from 2.7% to 2.5%. As labor report data continues to approach ‘full employment,’ the focus remains on the laggard of the Fed’s dual mandate - the inflation outlook.

The July Consumer Price Index (CPI) is released on Tuesday and consensus estimates are calling for a headline print of 0.9% y/y (down from 1% in June) with core inflation expected to hold steady at 2.3% y/y. In light of Friday’s disappointing retail sales release, a soft print on CPI could further exacerbate recent weakness in the greenback as expectations for higher rates from the Federal Reserve this year continue to diminish. Keep in mind we’ll also be looking to a fresh batch of commentary from Atlanta Fed President Dennis Lockhart, St. Louis Fed President James Bullard, New York Fed President William Dudley and San Francisco Fed President John Williams with minuets from the latest FOMC policy meeting to be released on Wednesday. As it stands, Fed Fund Futures are pricing in the first material expectation (+60%) for higher rates to be in September of 2017. 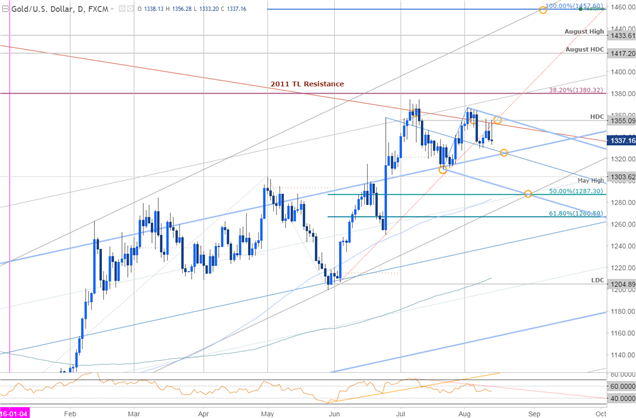 From a technical standpoint, prices continue to hold below key long-term trendline resistance extending off the record 2011 high. This week’s range ties for the smallest weekly range of the year- the last time was the week ending 7/22 (was the low for the month). Gold remains at risk for further losses while below the high-day close at 1355 with interim support seen at 1325/30.

We’ll be looking for a break of the objective monthly opening range with a break lower targeting 1303 & a more significant support confluence at 1287 where the 50% retracement of the late May advance converges on a pair of median-lines – Both areas of interest for possible short-side exhaustion / long-entries. While the immediate risk is for a deeper pullback, ultimately we’re looking higher in gold with a breach above near-term downtrend resistance targeting 1380. Continue to track this trade throughout the week on SB Trade Desk.