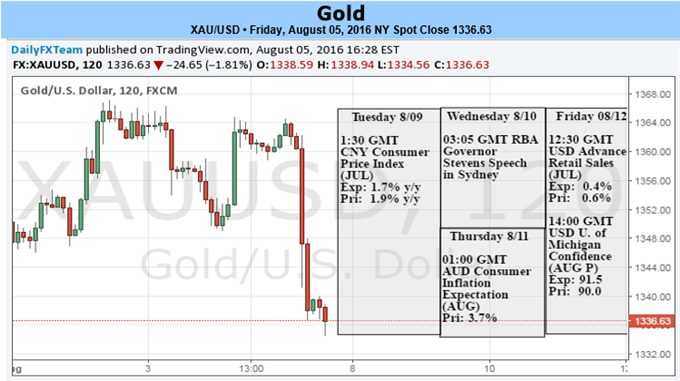 Last week ended with another bump higher in Gold prices as an abysmal U.S. GDP print brought to question the prospect of any near-term rate hikes out of the Federal Reserve. But just a week later, we’ve seen a fairly brisk reversal of that thesis after a blowout NFP report on Friday elicited a quick burst of U.S. Dollar strength that permeated through global markets. Gold was not left unfettered, as gold prices put in an outsized-reversal lower after the announcement, falling by -1.7% on the day.

But the longer-term up-trend in Gold is still very much intact: Gold prices are up 26% on the year, even including this most recent retracement; and as has been widely publicized this is very much on the back of a Federal Reserve that continues to support markets with dovish policy. So the big question when setting up directional biases on Gold is when the Federal Reserve might begin talking up higher rates again? Now this doesn’t necessarily denote that a hike may be nearing, merely that the Fed is exploring the prospect of tighter policy options. This would be similar to what markets felt in May as the Fed talked up ‘2-3 hikes in 2016,’ or more specifically, speaking of potential hikes at their next meeting in June; which created USD-strength and brought a greater-than $100 retracement in Gold prices throughout the month of May.

After last Friday’s GDP print came in so far below expectations, the prospect of higher rates out of the U.S. diminished mightily. But after this morning’s NFP report came in far beyond what markets were looking for, the fear of a slightly-more-hawkish Fed has driven the Dollar higher, pulling down Gold prices to find support near prior price action resistance in the $1,335-area of the chart.

This is a theme that could have near-term staying power. With U.S. equity markets at all-time highs, with some U.S. data still showing significant strength and with global markets resting so firmly on the expectation that the Fed won’t be making any near-term moves, only a slight increase in rate-hike expectations for September or even December as driven by positive U.S. data could provoke an extension of Dollar strength. Given the prior pattern of the Federal Reserve talking up tighter policy as equity markets rallied to fresh highs, the possibility for such a scenario certainly exists at the moment. Even the fear of such a situation could be enough to continue softening Gold prices.

So while the bigger-picture up-trend in Gold remains extremely attractive, timing is of the upmost importance as the trend-side moves higher have been quick and violent; often found around negative data points alluding to the prospect of ‘looser for longer.’ And while this can happen on any given data point, next week is simply devoid of the type of schedule that will often allow for such a move. There are no Fed speakers on tap, and outside of Chinese CPI on Monday and RBNZ on Tuesday, the economic calendar is lacking any ‘high impact’ announcements until we get to Friday’s batch of European GDP numbers.

More interesting for the long-Gold thesis is the Jackson Hole Summit scheduled for August 25th-27th. This is when the foremost economic minds will meet in Wyoming to discuss global economic issues. This will include numerous Central Bankers from the U.S. and international Central Banks, finance ministers, academics and many other financial market participants. Given that many economies around the world are struggling with similar issues, with few Central Banks wanting capital flows driving the value of their currency higher, this represents an interesting opportunity for Gold bulls.

As we move into next week with a light economic calendar ahead, the forecast for Gold prices will remain at neutral.