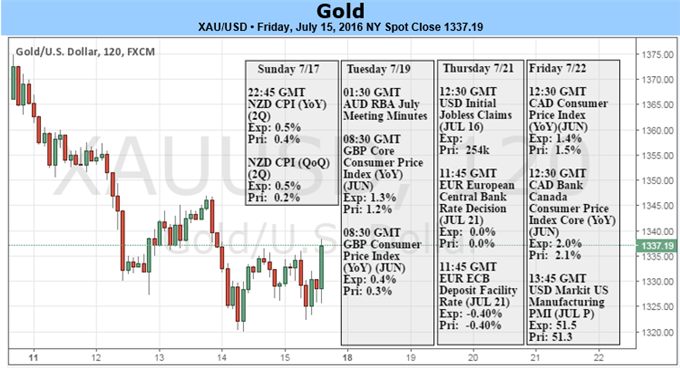 Gold prices are sharply lower this week with the precious metal down more than 2.8% ahead of the New York close on Friday. The losses snap a six-week winning streak that stretched into two-year highs and come amid continued strength in global equity markets with both the Dow & S&P hitting fresh record highs. Although the broader outlook for gold remains constructive, from a technical standpoint the metal is at risk for further losses in the near-term and could offer more favorable long-entries lower down.

CPI & retail sales data released on Friday topped expectations with core inflation unexpectedly climbing to an annualized rate of 2.3%. Keep in mind that headline CPI held steady at 1.0% - a full percentage point below the central bank’s 2% inflation target. In light of improving U.S. economic data and increased inflows into higher yielding assets, gold has remained on the defensive on waning demand for the perceived safety of the yellow metal. Still, it’s important to note that the bar remains high for central bank tightening with Fed Fund Futures still pricing the first likelihood for a hike to be in March of 2017. As such, I’ve been treating this retreat in bullion prices as corrective for now, with the technicals pointing to further weakness in the days ahead before turning higher. 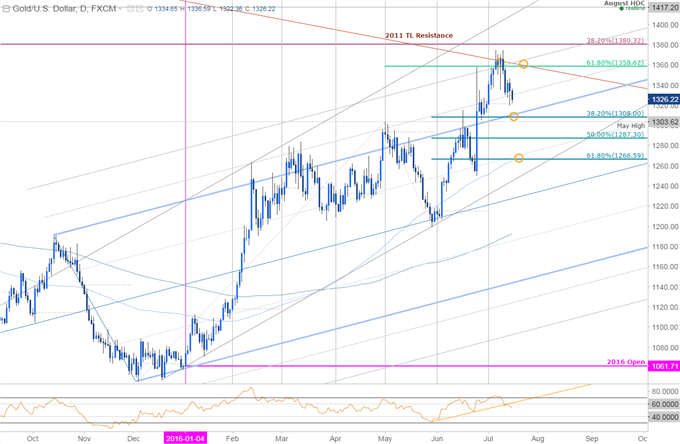 Last week I noted that gold had, “failed to close above a critical resistance confluence at 1358 and the risk heading into next week is for a near-term pullback in the metal. This level is defined by the 61.8% extension of the advance off the 2015 lows, the 1.618% median-line parallel of the ascending structure and a longer-term trendline resistance extending off the 2011 record highs. Interim support rests at the monthly open at 1321 with key support & near-term bullish invalidation set to 1303/08 where a basic 38.2% retracement of the late May advance converges on former median-line resistance- an area of interest for possible exhaustion / long-entries.”

Note that this week constitutes an outside-weekly reversal (bearish) and highlights the risk of further declines before prices level off. Gold has continued to trade within the confines of an ascending median-line formation off the 2015 lows and a break below former resistance (now support) at 1303/08 would suggests a larger correction is underway. Such a scenario would target subsequent support objectives at 1287 & 1264/66 where the 100-day moving average converges on the key 61.8% retracement of the late May ascent. A breach above 1380 would be needed to mark resumption of the broader uptrend. Continue to track this trade throughout the week on SB Trade Desk.