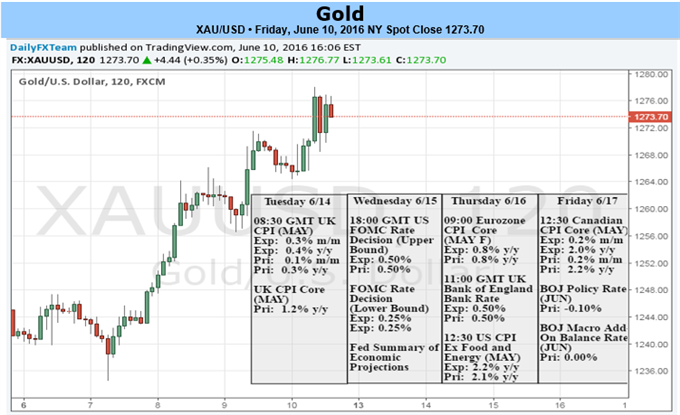 Gold prices rallied for a second consecutive week with the precious metal up more than 2.2% to trade at 1275 ahead of the New York close on Friday. The advance comes in spite of a rebound in the greenback with the U.S. Dollar Index (ticker: USDOLLAR) rallying nearly 1% after reversing off Fibonacci support mid-week. Key upcoming event risk puts the immediate topside bias at risk as the dollar struggles to regain its footing.

Heading into next week, all eyes are on the Fed with the FOMC policy meeting on tap for Wednesday. Fed fund futures are factoring a zero percent chance that the central bank will raise rates and we’ll be expecting most of the volatility to come by way of the statement and subsequent presser with Chair Janet Yellen. Traders will be closely eyeing the committee’s updated projections as they pertain to growth, inflation, employment and the all-important interest rate dot-plot. Last time around the projections showed median estimates for the fed funds rate between 0.75%-1% for 2016 with the longer-running terminal rate seen at 3.25%.

On the back of last month’s dismal Non-Farm Payroll report, expectations for the timing of Fed normalization have been pushed out with markets now pricing in the first rate hike to be in February of 2017. If the Fed projections are adjusted to reflect market expectations, look for the repricing to remain supportive of gold prices as concerns about domestic growth, a material slowdown in China and the upcoming UK referendum continue to set a high bar for the possibility off Fed tightening. 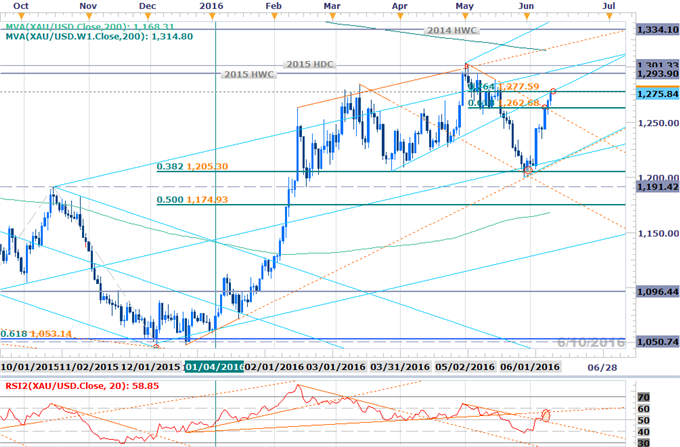 Last week I noted that, “Heading into next week, the near-term focus remains higher while above Friday’s low. Initial resistance is eyed at 1250 where the 50% retracement of the May decline converges on basic trendline resistance off the yearly high. A breach here would suggest a more meaningful reversal is underway with subsequent topside objectives eyed at the upper median-line parallel, currently around ~1270/71.” Indeed prices did break above trendline resistance extending off the yearly high before encountering a near-term resistance confluence at 1278 where the 76.4% retracement of the decline converges on a newly identified ascending median-line formation extending off the March low.

We’ll take a more neutral stance heading into next week’s key interest rate decision with a general long-bias favored while above this week’s low at 1235. A breach higher from here targets subsequent topside objectives at 1293 & 1301 (2015 high-week & high-day closes) with more significant resistance seen at the convergence of the 200-week moving average and a sliding parallel extending off the February high. Continue to track this trade throughout the week on SB Trade Desk.