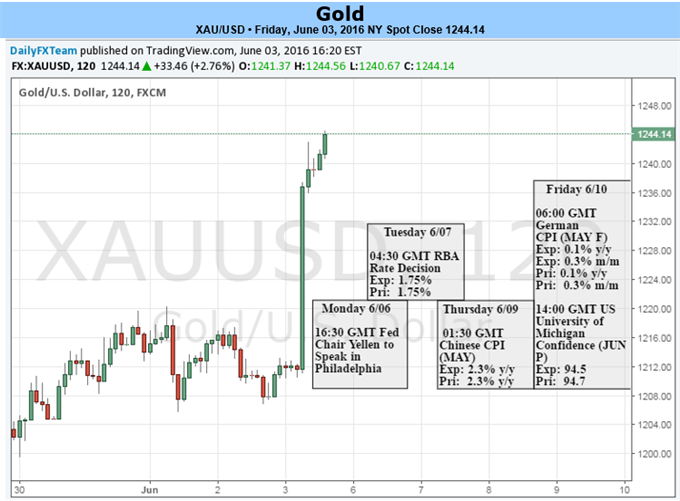 Gold prices snapped a 4-week losing streak with the precious metal rallying more than 2.2% to trade at 1239 ahead of the New York close on Friday. The bulk of the gains were achieved on Friday after a dismal U.S. labor report saw expectations for a June Fed rate diminish. While the implications for gold are constructive, from a trading standpoint, we’ll be looking for a near-term exhaustion high in prices heading into next week.

U.S. Non-Farm Payrolls for the month of May came in at just 38k, grossly missing expectations for a print of 165k with a downward revision to the previous month from 160k to 123k. Although the headline unemployment rate saw a larger-than-expected drop to 4.7%, the move comes alongside a decline in the labor force participation rate which hit its lowest levels since December at just 62.6%. The release prompted a massive sell-off in the greenback as gold prices surged through the weekly opening range highs.

Prospects for an imminent interest rate hike have plummeted on the back of the release with Fed Fund Futures now pricing in just a 4% chance the committee will raise rates at the June 15th policy FOMC meeting. This dramatic shift in pricing pushes out the first material expectation for a hike (+50%) until December. The U.S. economic docket is rather light heading into next week and traders will be lending a keen ear to comments from Fed officials on the back of Friday’s bleak employment report with Boston Fed President Eric Rosengren and Fed Chair Janet Yellen slated for speeches on Monday. The greenback is likely to remain on the defensive if officials take a more dovish tone and while gold is likely to see further recovery, the advance is approaching near-term technical resistance targets heading into next week. 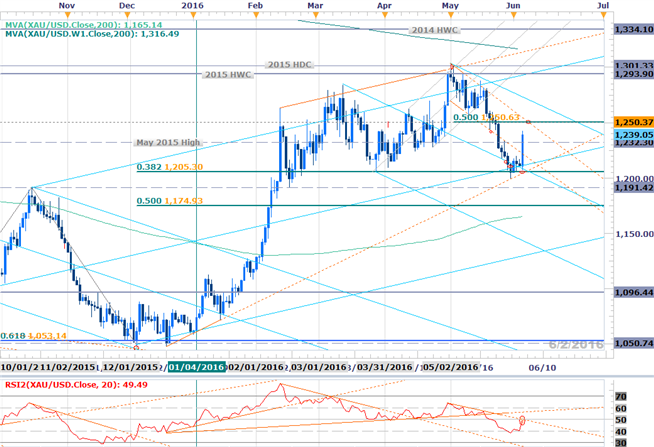 Last week I noted gold prices were trading into a “structural support range which extends into the 38.2% retracement / March lows at 1205. More immediate downside is likely, but after 8 consecutive days of losses, I would be on the lookout for some near-term recovery as daily momentum is also approaching the 40-threshold.” Indeed Monday saw a final attempt at a break below this region before rebounding higher with Friday marking an outside-day reversal off the median-line extending off the March high.

Heading into next week, the near-term focus remains higher while above Friday’s low. Initial resistance is eyed at 1250 where the 50% retracement of the May decline converges on basic trendline resistance off the yearly high. A breach here would suggest a more meaningful reversal is underway with subsequent topside objectives eyed at the upper median-line parallel, currently around ~1270/71. Note that daily RSI is approaching a resistance trigger and if compromised, would further reinforce the topside near-term outlook. Bottom line: looking for a pullback to stretch into an exhaustion high next week- likely to offer favorable short entries. A breach above the upper parallel needed to shift the broader outlook back to the topside for the gold prices. Keep in mind the monthly opening range is still taking shape and we’ll be looking for a break to further validate our directional bias heading deeper into June trade. Continue to track this trade throughout the week on SB Trade Desk.