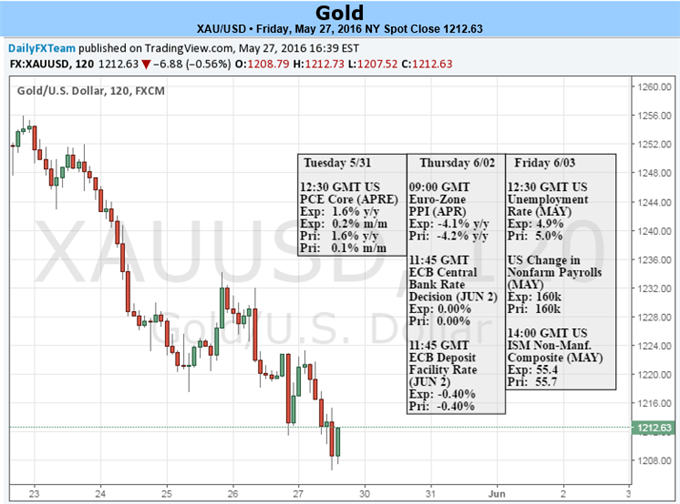 Gold prices fell for a fourth consecutive week with the precious metal plummeting more than 2.8% to trade at 1215 ahead of the New York close on Friday. The decline is on pace to mark the largest weekly loss since November and more losses are likely as expectations for higher borrowing costs continue to take root. Nevertheless with prices heading into near-term support and the monthly close coming just days after an extended holiday weekend, the technical outlook leaves the immediate short-side bias vulnerable.

Commentary from FOMC speakers continued to suggest the central bank remains poised to hike rates on improving US data. Remarks made by Federal Reserve Chair Janet Yellen at Harvard University on Friday were in line with general tone we’ve been getting from committee members. While she was adamant that the central bank remains “data dependent,” Yellen said she believed that a rate hike, “in the coming months” would be appropriate. Interest rate expectations have continued to build on the since last week’s release of the FOMC minutes with Fed Fund Futures now showing a 34% chance of a 25 basis point hike in June and a 52% chance for July.

Highlighting the U.S. economic docket next week will be the release of the Fed’s Beige book and the May Non-Farm Employment figures. Consensus estimates are calling for the addition of 160k jobs with unemployment holding steady at 5%. Firmer data would further stoke interest rate expectations with gold likely to remain on the defensive on a stronger print. From a technical standpoint, gold has broken below some key support barriers and while the broader focus is lower, we’ll want to take a more neutral stance heading into the close of the month as prices approach near-term support. 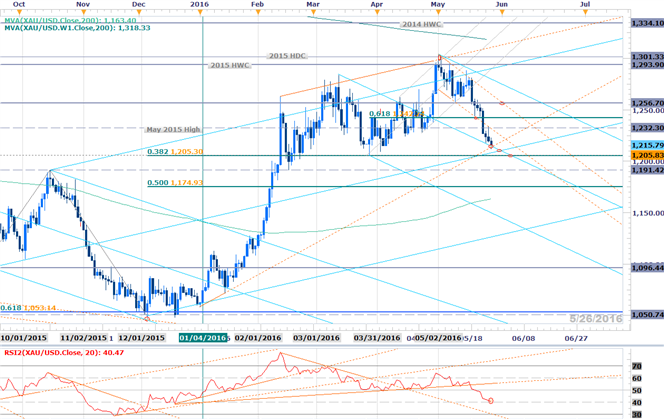 Last week I noted, “Bottom line: looking for a new low into structural support next week to possibly offer a near-term rebound in gold.” A downside break of the embedded channel saw an accelerated drop into the top end of this structural support range which extends into the 38.2% retracement / March lows at 1205. More immediate downside is likely, but after 8 consecutive days of losses, I would be on the lookout for some near-term recovery (if not a pause) as daily momentum is also approaching the 40-threshold.

Interim resistance stands at the 1242/46 with our bearish invalidation level at 1256. A rally surpassing the upper median-line parallel (~1270) would be needed to shift the broader focus back to the long-side. A break lower targets subsequent support objectives at the 1191 pivot & the 50% retracement of the advance off the December lows at 1175. Keep note of broader dollar price action as well with the Dow Jones FXCM U.S. Dollar Index (Ticker:USDOLLAR) approaching resistance at the 50% retracement of the 2016 range at 11989.