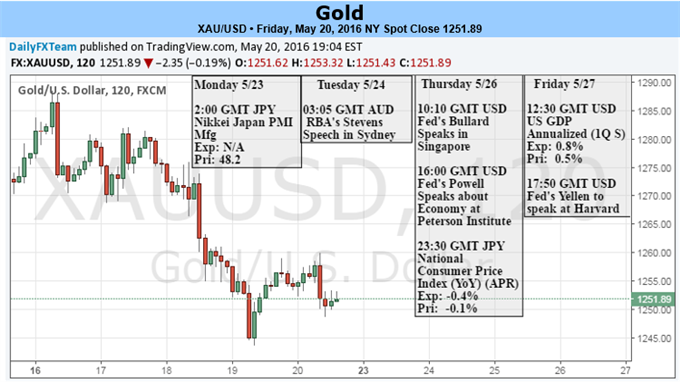 Gold Decline Intensifies as Fed Hints of Rate Hikes Ahead

Gold prices are down for a third consecutive week with the precious metal off 1.69% to trade at 1251 ahead of the New York close on Friday. The losses come amid continued strength in the greenback with the Dow Jones FXCM U.S. Dollar Index closing the week just below key resistance extending off the 2016 high. The outlook for monetary policy continues to be the main focus moving forward with key data next week likely to offer further insight on whether economic conditions warrant an interest rate hike next month.

The release of the FOMC minutes from the latest policy meeting showed committee members remain poised to raise borrowing costs, fueling a marked shift in Fed Fund Futures which are now pricing in a 30% probability for a 25basis point hike next month (up from just 4% ahead of the FOMC minutes this week). The first material expectation for tightening is in September which is showing a 59% likelihood. The shift has continued to prop-up the greenback at the expense of gold – but these expectations can change rather quickly so we’ll continue to watch key US economic data as committee members remain adamant that the central bank remains largely data dependent.

Looking ahead to next week, traders will be closely eyeing the release of U.S. Durable Goods as well as the second read on 1Q GDP. Note that growth in the first quarter was disappointing (just 0.5% q/q), with consensus estimates calling for an upward revision to 0.8% q/q. Of particular interest will be the release of the Personal Consumption Expenditure (PCE) which is the Fed’s preferred gauge on inflation and a stronger print could further stoke expectations for a June rate hike. We’ll also be looking for a fresh batch of central bank rhetoric with speeches from St Louis Fed President James Bullard, Governor Jerome Powell and Chair Janet Yellen on tap. If expectations for a June hike continue to be brought forward, look for gold remain on the defensive. Although the technical picture remains bleak, the decline is coming into near-term support targets which may offer prices a near-term reprieve from the recent downside pressure. 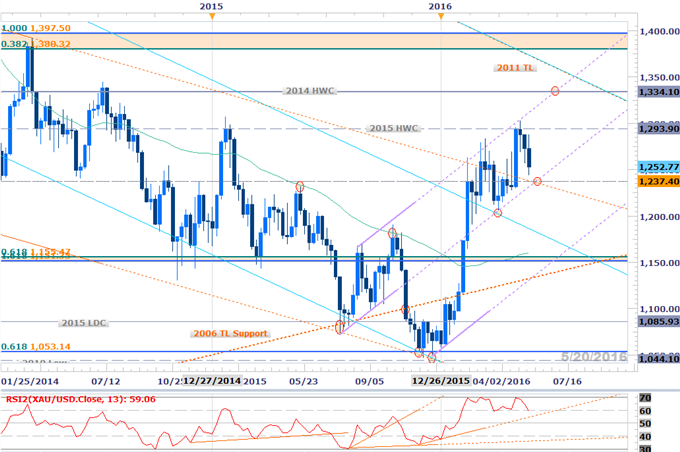 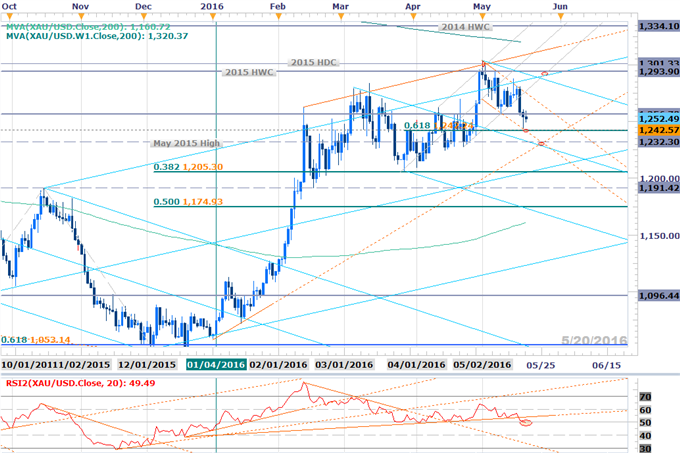 Last week I noted, “Bottom line: its make-or-break heading into next week and while we could get a near-term rebound off this structural support, we’d be looking to sell strength early in the week targeting the monthly low at 1256 & the 61.8% retracement at 1242.” Subsequently, gold made a high on Monday before breaking the lower median-line parallel with the low registering at 1243.72 on Thursday.

Bullion prices have been trading within the confines of a well-defined descending channel and a break of the monthly opening range this week keeps our outlook weighted to the downside while within this formation. Note that gold is at the bottom of the channel range and as such, heading into next week we’ll want to avoid chasing early weakness. Interim resistance stands at 1266 backed by this week’s open at 1273. Critical resistance & bearish invalidation remains 1291/93- a region defined by the 2015 high-week close, the monthly open and the upper median-line parallel.

A break lower targets a more significant support confluence around 1232 where the May 2015 high converges on basic trendline support off the yearly low & the median-line extending off the 3/4 high. Bottom line: looking for a new low into structural support next week to possibly offer a near-term rebound in gold. As noted earlier, the USDOLLAR index is also testing big resistance into the close of the week and broader weakness in the greenback could limit the downside for gold near-term.