Gold prices pulled back to mark the first weekly loss in three with the precious metal off 0.79% to trade at 1230 ahead of the New York close on Friday. The decline comes amid renewed strength in broader equity markets with all three major U.S. indices now in positive territory for the year. Despite the losses however, the medium-term outlook remains constructive while above a support confluence at 1211.

In light of next week’s light U.S. docket, traders will be lending a keen ear to commentary from another round of Fed speakers with New York President William Dudley, Minneapolis President Neel Kashkari and Boston Fed President Eric Rosengren on tap. Officials have continued to suggest that the central bank remains on track to further normalize policy this year with Atlanta Federal Reserve President Dennis Lockhart noting that there is still room for two or three rate hikes in 2016.

Market expectations are not in line with these comments however with Fed Fund Futures now pricing in the first rate hike to be in December. As such, trader will continue to monitor incoming economic data both domestically & aboard as global central banks continue to foster a more accommodative monetary stance amid growing concerns regarding subdued global growth among the world’s largest economies. Higher rates are generally bearish for the yellow metal which does not pay a dividend and if interest rate expectations continue to fall, look for prices to remain well supported. 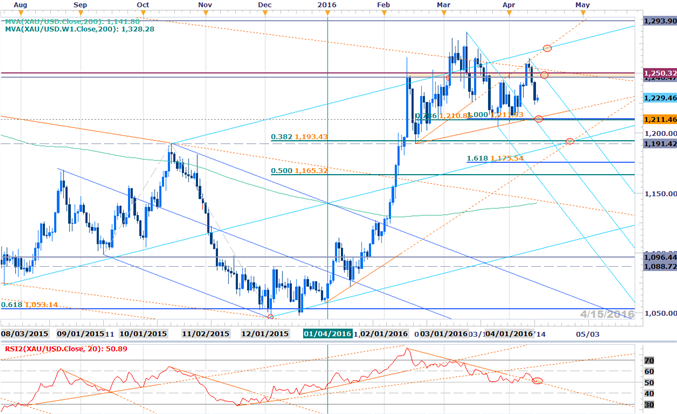 From a technical standpoint, gold is either setting up a multi-month head & shoulders top OR consolidating into a triangle with an inevitable topside breach favored. In either case, the key levels remain the same with key support eyed at 1211/12 backed by our broader bullish invalidation level at 1191/93. Resistance stands at the February & March high-day closes at 1246/50 with a breach above the median-line confluence, just ahead of the 2016 high-close at 1271 needed to validate the next leg higher. Note that daily momentum has continued to hold above 50 since the start of the year and we’ll want to see this continue if the long-bias is to remain intact.