Gold price rallied for a second consecutive week with the precious metal advancing 1.26% to trade at 1237 ahead of the New York close on Friday. The advance comes amid weakness in broader equity markets with all three U.S. benchmark indices down more than 1% across the board heading into the close of the week. The path of U.S. interest rates remains central focus with the greenback coming under pressure as the Dow Jones FXCM U.S. Dollar Index (Ticker: USDOLLAR) falling to its lowest levels in more than three weeks.

Looking ahead to next week, traders will be closely eyeing the release of U.S. retail sales, the Fed’s Beige Book, CPI and the preliminary read on the April University of Michigan sentiment surveys. Gold has largely remained well-supported on the back of the release of the FOMC minutes this week where the committee cited a more cautious tone on future rate hikes as risks to global growth continue to hamper the central bank’s appetite to normalize policy. Fed Fund Futures are now pricing in the next rate hike to be in December and gold is likely to remain supported here as the dollar struggles on diminishing expectations for higher rates in the months ahead.

A host of speeches from Fed officials will also be of interest with New York Federal Reserve President William Dudley, Dallas Fed President Robert Kaplan and Richmond Fed President Jeffrey Lacker, slated for remarks next week. Interest rate decisions from the Bank of Canada (BoC) & the Bank of England (BoE) may also fuel volatility in their respective pairs vs the dollar as it becomes more evident that the committee members remain reluctant to normalize amid diverging monetary policies seen among the world’s largest central banks. 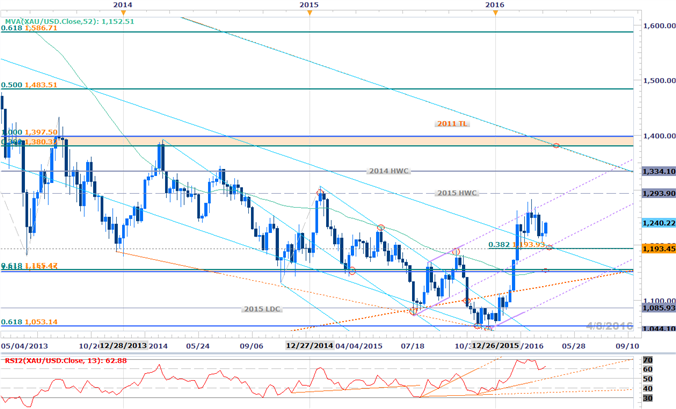 From a technical standpoint, gold remains within the confines of an “ascending median-line formation embedded within the broader descending formation off the 2011 record high. The medium-term outlook remains constructive while above confluence support into 1190/93 where the trendline extending off the July 2015 low (purple) converges on the broader descending median-line (blue) and a basic 38.2% retracement of the advance off the 2015 low.” 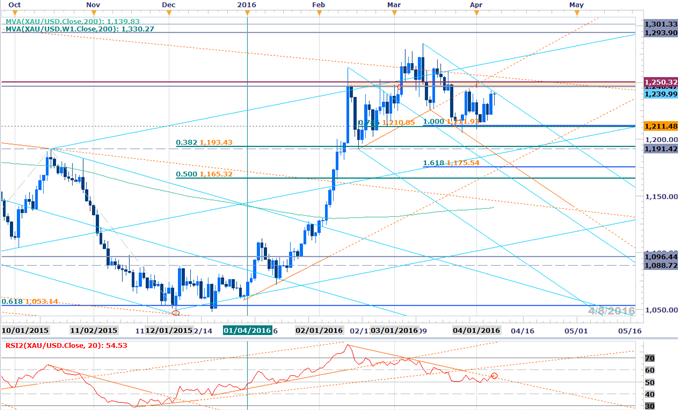