Gold Consolidation Break to Clear the Way Ahead of NFPs

Gold prices slid for a second consecutive week with the precious metal off just 0.2% to trade at 1224 ahead of the New York close on Friday. Prices have largely remained in consolidation after stretching into a high at 1263 earlier in the month and despite a marked advance in the Dow Jones FXCM U.S. Dollar Index (Ticker: USDOLLAR).

A stronger-than-expected revision to U.S. 4Q GDP and a pickup in the Personal Consumption Expenditure (PCE), the Fed’s preferred gauge of inflation, fueled strength in the greenback as market participants repriced expectations for higher rates from the central bank. Fed fund futures inched up on the back of the release, pricing a 30% chance of a 25basis point hike at the June policy meeting.

Looking ahead to next week, traders will be closely eyeing U.S. pending home sales, ISM data and the all-important February Non-Farm Payrolls report. With this week’s uptick in PCE, a stronger print on the employment report could further bring-in interest rate expectations as the central bank looks to achieve its dual mandate of fostering maximum employment & price stability (i.e. 2% inflation). Gold prices could see some headwinds from stronger data next week as higher rates will generally tend to weigh on bullion which does not pay a dividend. That said, the technical picture has us holding more neutral bias here heading into next week and the start of March trade with the broader outlook constructive above 1150/55. 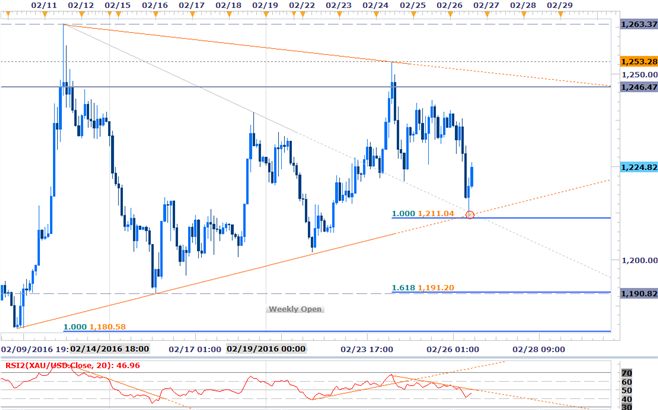 Last week we noted that gold prices had failed at a BIG region of resistance at the “confluence of the 78.6% retracement of the 2015 range, the broader 23.6% retracement of the decline off the 2011 record highs and basic trendline resistance extending off the late-2013 high at 1251/52.” Gold has continued to consolidate below this level with prices carving out a triangle formation just below this key resistance. Note that Friday’s low came in at the confluence of the 100% extension extending off the weekly, triangle support and former basic trendline resistance (turned support) extending off the monthly high at 1211.

We’ll be looking for a break of this consolidation structure as we continue to trade into the apex with a topside breach ultimately favored. Interim resistance stands at the 2016 high-day close at 1246 backed by the weekly high at 1253 & yearly high at 1263. A break below today’s low risks more significant losses for gold with such a scenario targeting the 1.618% extension & 2/15 low at 1190/91 and the broader 100% extension off the monthly high at 1180.