Lackluster US GDP to Help Gold Shine- 1252 Hurdle in View

Gold prices snapped a 4-week winning streak this week with the precious metal off 0.84% to trade at 1227 ahead of the New York close on Friday. The pullback comes amid a rebound in broader equity markets with the Dow Jones FXCM U.S. Dollar Index (Ticker: USDOLLAR) staging a near-term recovery on the back of a sharp two-week sell-off earlier in the month. Nevertheless, bullion is on course to set its best yearly start in more than 30 as weakness in global equity markets and plummeting commodity prices continue to fuel demand for the perceived safety of the yellow metal.

Looking ahead to next week, traders will be closely eyeing U.S. housing data, durable goods orders and the second read on 4Q GDP. Of particular interest will be the Core Personal Consumption Expenditure (PCE), the Fed’s preferred gauge of inflation. With central banks around the world now facing the prospects of negative interest rates (something Japan, Denmark, Sweden & Switzerland have already done), a weak read on US inflation would further dampen expectations for a Fed rate hike this year and in turn gold is likely to remain well supported as investors seek alternative stores of wealth.

Aside from the economic docket, be on the lookout for a host of Fed speakers next week with Vice Chair Stanley Fisher, St Louis President James Bullard, Atlanta President Dennis Lockhart and San Francisco President John Williams slated for speeches next week. Traders will be attempting to ascertain the timing & willingness of the central bank (or if there even is a willingness) to further normalize monetary policy amid the ongoing turmoil in broader financial markets. 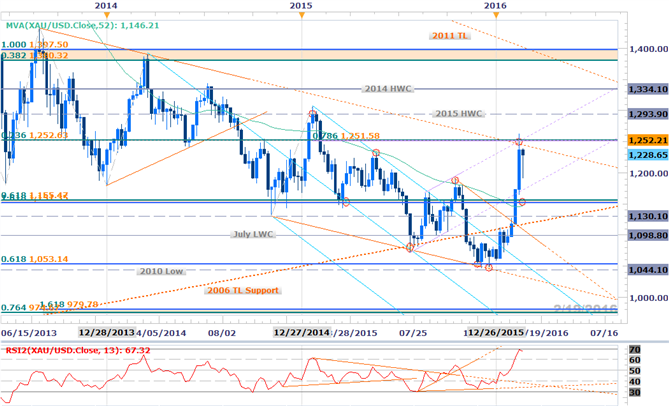 From a technical standpoint, gold reversed off 12-month highs last week at the confluence of the 78.6% retracement of the 2015 range, the broader 23.6% retracement of the decline off the 2011 record highs and basic trendline resistance extending off the late-2013 high at 1251/52. After capping out a nearly 20% gain since the start of the year, this week’s pullback rebounded precisely off the October high & although the medium-term outlook remains favorable, we’ll be looking for another near-term low in price to offer long entries.

Interim support rests at the trendline extending off the July lows (~1175) with our bullish invalidation level set at the Fibonacci confluence at 1151/55. A breach above this key resistance range targets subsequent objectives at the 2015 high-week close at 1293 & the 2014 high-week outside reversal close at 1334. Keep in mind that weekly momentum has climbed to its highest level since the 2011 all-time record highs with this prominent change in behavior suggesting that a more significant low is in place.