Gold prices are markedly higher after a seven week losing streak with the precious metal up 1.8% to trade at 1114 ahead of the New York close on Friday. The advance comes on the back of losses in the greenback with the Dow Jones U.S. Dollar Index (Ticker: USDOLLAR) breaking to fresh monthly lows as China fears dominated market headlines. Although the broader fundamental picture for gold remains unchanged, the near-term rally may yet have some breath as the

Fears of a material slowdown in China coupled with ongoing concerns surrounding the global economy raises the bar for a Fed rate hike at the September 17th interest rate decision which would mark the first shift in policy since 2004. With China widening the Yuan trading band by the most on record, the move has spurred speculation that the central bank may take a more proactive approach to address the downside risks for growth and inflation, and bets for a further expansion of the global easing cycle may keep the Fed on the sidelines as the outlook for the world economy remains clouded with high uncertainty.

At the same time, the renewed decline in energy prices may also dampen interest rate expectations as it undermines the Fed’s ability to achieve the 2% inflation target over the policy horizon, and the key data print coming out ahead of the September meeting may play an increased role in driving market volatility. The U.S. July Consumer Price Index (CPI) will be central focus next week with consensus estimates calling for an uptick in core price growth to 0.2% m/m. With the recent moves from the PBOC likely to weigh on expectations for higher rates from the Fed in the near-term, a weaker than expected gauge on inflation could further hit the greenback. In turn gold may yet have more upside before broader downtrend resumption.

From a technical standpoint, gold turned from critical support we’ve noted over the past four weeks into 1067/70 where the median-line off the 2014 high converges on basic trendline support dating back to June 2006 and the 100% extension of the decline off the yearly high. Price has now broken out of a near-term descending median-line structure extending off the May high and although the broader bias remains weighted to the downside, near-term the risk for the rebound to press higher remains with key resistance & bearish invalidation eyed at 1145/50. 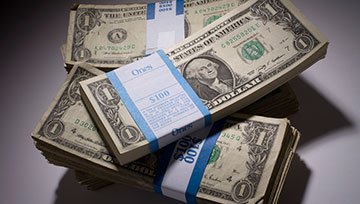