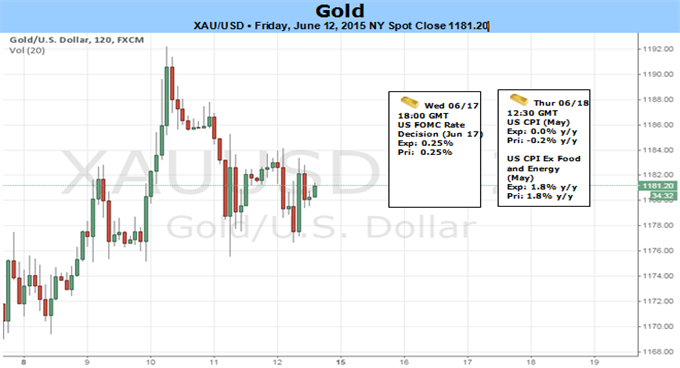 Gold prices traded higher this week with the precious metal up 0.80% to trade at $1181 ahead of the New York close on Friday. The move marks the first weekly advance in four with bullion retaining its initial June opening range. With that said, the technical outlook for gold remains mired as price continues to straddle the monthly open. With major event risk on the docket next week, the fundamental developments may serve as a catalyst to generate a more decisive break of this range and validate a clearer directional bias over the near-term.

All eyes will be on the Fed next week with the FOMC policy decision on tap for Wednesday. The release of the policy statement will be accompanied by the committee’s updated quarterly projections on growth, inflation, unemployment & interest rates. The subsequent press conference with Chair Yellen will be in focus with traders looking for clues as to central bank’s outlook on the timeline for interest rates. Should the projections show a more upbeat assessment for U.S. growth, look for gold to come under pressure as interest rate expectations are brought forward.

Beyond next week’s interest rate decision, the release of the U.S. May Consumer Price Index (CPI) figures on Thursday could prove important for gold. Despite Fed’s pledge to achieve the 2% inflation target over the policy horizon, a lackluster reading for core consumer prices may continue to undermine the central bank’s forecast and put the committee on a more gradual path to normalize monetary policy. Such a scenario would be supportive for the precious metal in the near-term.

From a technical standpoint gold broke out of a descending pitchfork formation off the May high with the rally extending as high as 1192 before pulling back into the close of the week. Bullion remains at risk while below 1197 with a breach above 1204 needed to put the long-side back into focus. Key near-term support rests at 1163/64 where the 61.8% extension of the decline off the May highs converges on the 76.4% retracement off the advance off the March low. A break below this level targets the November 2014 TL support / 1150/51. Note that daily momentum has continued to hold above the 40-threshold on this pullback off the May highs, supporting the argument that gold may be attempting to base here. We’ll look for a break of the monthly opening range alongside the 40-50 RSI range for guidance heading into next week.