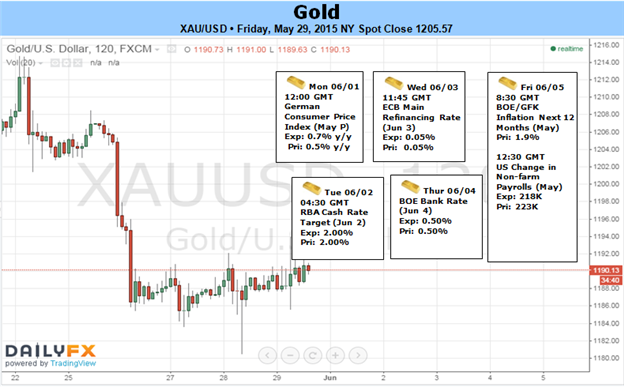 Gold prices are lower for a second consecutive week with the precious metal off by more than 1.2% to trade at 1191 ahead of the New York close on Friday. The losses come amid continued strength in the greenback with the Dow Jones FXCM U.S. Dollar Index (Ticker:USDOLLAR) posting an impressive 5-day rally into fresh monthly highs.

With time quickly winding down to the Federal Open Market Committee interest rate decision on June 17th, the data prints due out next week may heavily impact the market volatility heading into June with all eyes on the May Non-Farm Payrolls. Consensus estimate are calling for another 225K expansion in employment with the jobless rate widely expected to hold steady at an annualized 5.4%, the lowest since 2008. Ahead of Friday’s key event risk, the employment components for the ISM manufacturing & non-manufacturing surveys may shape NFP expectations amid the ongoing mixed batch of data coming out of the world’s largest economy.

From a technical standpoint, gold broke back below the initial May opening range high at 1200 early in the week before coming into trendline support extending off the yearly low. Note that the decline has continued to trade within the confines of a well-defined descending channel formation off the monthly high with 3-waves down completing a 100% extension off the highs into 1183 (stretch low at 1180).

We’ll take a neutral stance heading into the monthly open with a break lower targeting 1176 backed by the 1.618% extension at 1164. A breach above channel resistance risks a rally back into the near-term bearish invalidation level at the 1200. Keep an eye on the RSI resistance trigger extending off the May high- breach would be bullish.