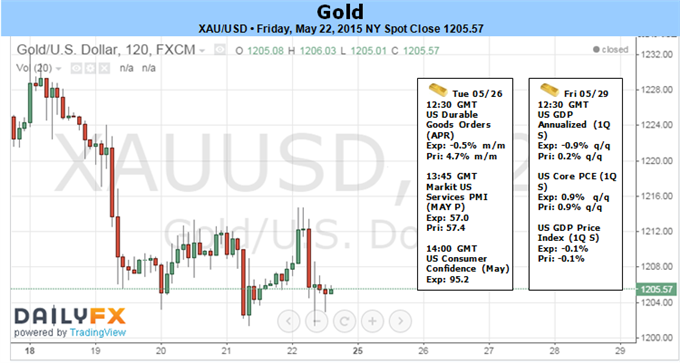 Gold Outlook Remains Supportive Above 1200- All Eyes on FOMC, GDP

Gold prices are softer going into the final full week of May, with the precious metal off by more than 1.5% to trade at 1203 ahead of the New York close on Friday. The decline comes amid a sharp rebound in the greenback with the Dow Jones FXCM U.S. Dollar Index (Ticker:USDOLLAR) rallying more than 1.6% to snap a 5-week losing streak. Despite this week’s lackluster performance, gold has continued to hold above technical support and the broader outlook remains constructive while above 1200.

Although the U.S. dollar showed a bullish reaction to the U.S. Consumer Price Index on Friday, the ongoing contraction in the headline reading and the lack of growth in the core rate of inflation may push the Fed to preserve the zero interest rate policy well into the second half of 2015. The committee has stated that conditions need to be in place for the central bank to meet the 2% inflation target before moving the benchmark interest rate amid the ongoing slack in the real economy.

Gold prices have largely reacted favorably to poor U.S. metrics as of late (and vice versa) as markets attempt to gauge the timing & pace of the Fed’s normalization cycle. As such, market dynamics may encourage positive U.S. data to dampen the appeal of the precious metal going into the U.S. event risks scheduled for the days ahead.

Fed speeches, Durable Goods Orders, Consumer Confidence & the second read on 1Q GDP will be in focus ahead into the end of May. Consensus estimates are calling for a downward revision to the initial forecast with expectations now projecting an annualized 0.9% contraction in the growth rate. The print would mark the first negative print since the 1Q of 2014, and a weaker-than-expected read could further kick out interest rate expectations as the FOMC Minutes revealed a June 17th interest rate hike is ‘unlikely.’

From a technical standpoint, gold is hovering just above key support into 1200 where the initial monthly opening range high converges on the lower median-line parallel extending off the yearly low. We will reserve this region as our bullish invalidation level with a break below targeting putting into focus support targets at 1187 & 1176. Resistance is eyed with the 200 day moving average at 1215 backed by 1225. A breach above this threshold keeps the long-bias in play targeting the upper median-line parallel / 1244/46. Note that a multi-month momentum support trigger remains in play off the March lows – break would be bearish.