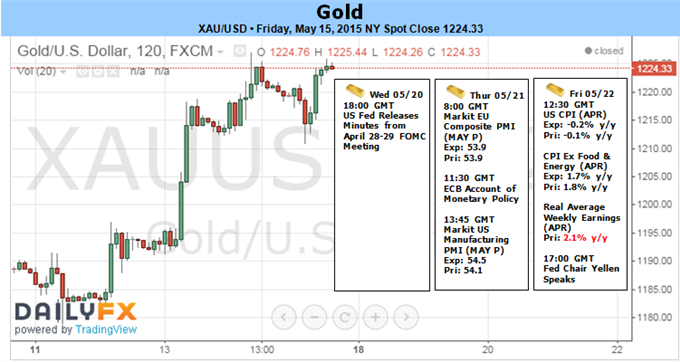 Gold prices surged this week with the precious metal rally nearly 3% to trade at $1223 ahead of the New York close on Friday. U.S. data points continued to disappoint this week with April Advanced Retail Sales, Industrial Production & the University of Michigan Sentiment survey’s all missing consensus estimates. With that said, the event risks line up for the week ahead may continue to dampen the appeal of the greenback and heighten demand for the precious metal should the data point to a further slowdown in U.S. growth and inflation.

An update on the housing market next week will be in focus with Housing Starts, Building Permits & Existing Home Sales on tap. Highlighting the economic calendar will be the release of minutes from the latest FOMC policy meeting on Wednesday with the April Consumer Price Index (CPI) rounding out the docket on Friday. However, the Fed Minutes may provide little clarity for the policy outlook on the back of the lackluster statement following the April 29 interest rate decision and the recent string of soft data with consensus estimates are calling for a slowdown in both the headline & core rate of consumer price growth next. As such, look for gold to remain supported on weaker US metrics as the dollar rout persists.

A look at the historical relationship between the US 10yr / 30yr yield-spread and gold suggests the precious metal could indeed be at risk for a further advance given the run up in the interest rate differentials (more than 40% off the March lows). As a result, market participants may put greater emphasis on this relationship especially as the weakening outlook for the U.S. economy raises the Fed’s scope to carry the zero-interest rate policy into the second-half of 2015.

From a technical standpoint, gold broke above the monthly opening range high this week with the rally extending through a key median-line confluence to test resistance at the 50% retracement of the decline off the January 2015 high at $1225. This marks the second consecutive weekly advance in gold with the daily & weekly momentum signatures breaking above the 50-threshold (constructive). A breach above interim resistance targets a confluence at the upper median-line parallel and the 52-week moving average around 1234/35 backed by a Fibonacci cluster at 1245/48. Interim support rests with Friday’s low at $1210 with only a move sub-$1200 invalidating the long-side of the trade.