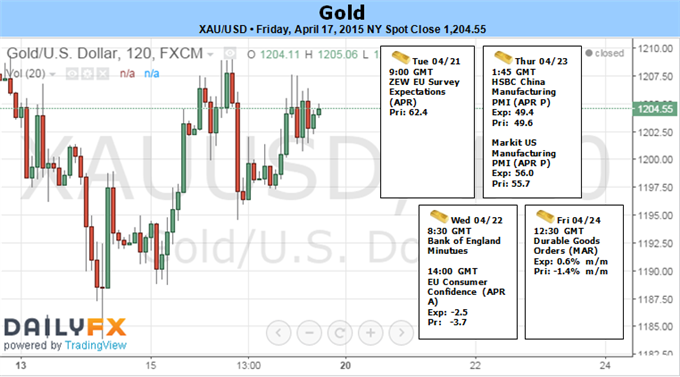 Gold prices are softer for a second consecutive week with the precious metal off nearly 0.27% to trade at $1204 ahead of the New York close on Friday. Price action has been uninspiring over the past few sessions despite broader volatility in equity markets, with S&P posting its largest single-day decline since March 25th.

The March US Consumer Price Index (CPI) released on Friday was mixed with the headline year-on-year print showing a contraction of 0.1% while the core rate increased from 1.7& to 1.8% y/y. The data offered little assistance to the battered greenback with the dollar trading heavier against all of its major counterparts heading into the close of the week. Gold looks to close the week within the initial weekly opening range with prices continuing to contract after failing to breach above the March highs earlier in the month.

Economic data will be light next week with US Durable Goods Orders on Friday highlighting the docket. Aside from the ongoing political uncertainty in Europe, traders will be closely eyeing the greenback with the Dow Jones FXCM U.S. Dollar Index (Tickers:USDOLLAR) now at risk for a correction lower after breaking below multi-month slope support. The broader picture for gold remains bearish as expectations for a Fed interest rate hike this year continue to weigh on demand for non-yielding assets. However, the Fed now runs the risk of further delaying its first interest rate hike in nearly a decade as growing geopolitical concerns, strength in the dollar and soft inflation continue to limit the central bank’s scope to begin the normalization cycle. As such gold may continue to see a reprieve with the momentum profile suggesting more upside may be on the cards before the resumption of the broader down trend.

From a technical standpoint, the near-term outlook remains clouded as the monthly range continues to compress. Key support rests at 1173/77 and we will reserve this threshold as our medium-term bullish invalidation level. Interim resistance is eyed at 1214 (April high day close) backed by the 50% retracement of the 2014 range / 200-day moving average at 1225/29. Key resistance stands at 1245/48 with a breach above targeting objectives into 1300. That said, we’ll be looking for a break of the monthly opening range to validate our near-term bias with the broader outlook weighted to the topside while above 1173.