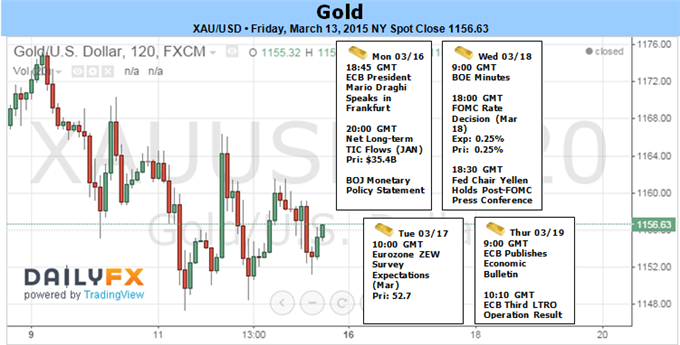 Gold prices are off for a second consecutive week as the commodity rout continued with the precious metal off by more than 1% to trade at 1155 ahead of the New York close on Friday. The losses come amid ongoing strength in the greenback as the EURUSD drifted deeper into 12year lows. However with prices now coming into a key area of technical support and major event risk on tap next week, the short-side of the trade may be at risk near-term.

Disappointing US retail sales data this week cooled the dollar’s rally temporarily as the weaker print dampened the argument that lower energy prices would drive more consumer spending. Still, the Fed remains on course to raise rates later this year as the labor market recovery continues to approach maximum employment and although inflation remains subdued, the central bank expects “transitory” factors to subside in the medium-term. Look for the dollar to maintain its footing as higher interest rate expectations continue fuel demand with gold to remain under pressure amid weak inflation and strength in the greenback.

The FOMC policy meeting next week will be central focus for markets with Chair Janet Yellen and company releasing the updated quarterly projections on growth, inflation and employment. The subsequent press conference will be of particular interest as market participants attempt to ascertain the Feds timeline for normalizing monetary policy. A more cautionary stance could offer a reprieve to the recent sell-off in bullion which will open next week just above a critical support zone.

Last week we noted, “bottom line: looking lower while below Friday’s highs with support expected into 1150.” From a technical standpoint, gold ended a 9-day losing streak on Friday, the longest in nearly 40years and leaves the precious metal just above a critical region of support defined by longer-term Fibonacci relationships as well as the 2014 lows at 1150. This support zone is backed by 1137. A break below this threshold risks sharper losses for bullion with subsequent support objectives seen at 1125/30, 1099 & the 2010 low at 1044. Interim resistance stands at 1172/73 and this level will serve as our near-term bearish invalidation level with a breach above targeting trendline resistance off the January highs which converges on a basic 23.6% retracement of the yearly range at 1185 heading into mid-next week. Bottom line: its downtrend at support- with major even risk next week likely to offer a catalyst for price action on either a recovery back into the yearly trendline, or a continuation of the broader primary downtrend.