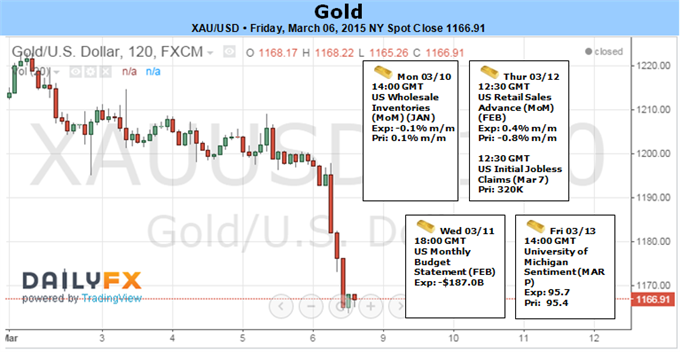 Gold prices plummeted this week with the precious metal off by more than 3.9% to trade at 1165 ahead of the New York close on Friday. The losses come on the back of a stronger-than-expected US employment report as the US Dollar surged into fresh highs not seen since 2003. For gold, the damage may be done as higher rates weigh on the luster of the yellow metal which broke a key support barrier late in the week.

Friday’s US Nonfarm payrolls report showed a gain of 295K jobs for the month of February topping expectations for a print of just 235K. The headline unemployment rate also topped estimates with a 0.2% decline to 5.5%, its lowest level since 2008. The USD surged on the release with the Dow Jones FXCM U.S. Dollar Index (Ticker: USDOLLAR) climbing to fresh 11 year highs as gold broke below a critical support barrier on expectations that the Fed remains on course for a 2015 rate-hike.

It’s important to note that despite the stronger than expected headline NFP print, wage growth remains subdued while discouraged workers continued to leave the labor force as the participation rate slips back to a 30-year low. Although the Fed expects lower energy costs to boost disposable income, the committee may share the same fate as its UK counterpart and further delay its normalization cycle as stagnant household earnings undermines the outlook for private-sector consumption, one of the leading drivers for growth and inflation. As a result, the U.S. Retail Sales report may play a greater role in driving interest rate expectations next week given the recent weakness in discretionary spending.

From a technical standpoint, gold broke below the 1195 critical support range we’ve been watching for the past three-weeks with the move fueling a $30+ drop on Friday. The day marks the largest single range since February 6th (which coincidentally marked the break of the February opening range) and completes a massive weekly outside reversal candle. Note that key weekly support starts at 1155 which is defined by the 61.8% retracement of the 2008 rally & the late 2010 swing low with critical support seen lower at 1150/51. Initial resistance stands at 1182 (2015 open) & is backed by 1198/1200 (bearish invalidation level). We could get a snap-back here for a short reprieve but bottom line- looking lower while below Friday’s highs with support expected into 1150.