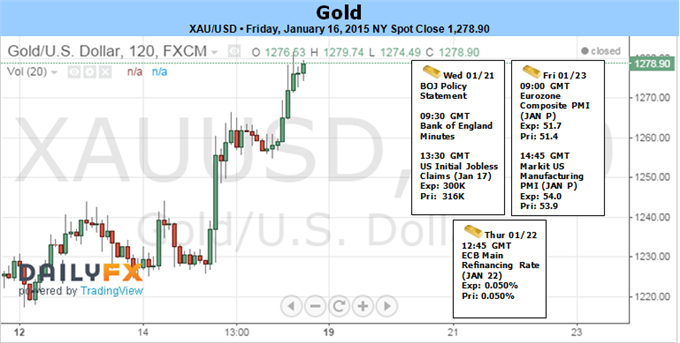 Gold prices are markedly higher this week with the precious metal rallying more than 4% to trade at $1272 ahead of the New York close on Friday. The advance marks the single largest weekly gain in ten months and took prices to the highest levels in four months. The rally comes amid broader declines in US equity markets with all three major indices ending the week off nearly 2%. A surprise move by the Swiss National Bank to end its three-year currency peg to the Euro dealt another blow to sentiment with gold the chief beneficiary this week.

Looking ahead to next week traders will be eyeing key US housing market data with housing starts, building permits & existing home sales on tap. Consensus estimates are calling for a stronger series next week and could keep the US dollar on firm footing. It’s important to note that the USDOLLAR to gold negative correlation has been weakening since late October and despite the recent strength in the greenback, gold prices may continue to push higher as the global growth concerns take root.

The main event next week will be the European Central Bank interest rate decision on Thursday where market participants are looking for a major announcement. On the back of this week’s shocking move from the SNB, speculation that the ECB will announce its quantitative easing program has kept European equity bourses afloat this week despite the losses seen state side. Should the program underwhelm market participants, look for gold to remain supported with the technical picture suggesting the medium-term outlook remains constructive.

Last week we noted that, “a breach above resistance targets objectives at $1230 and critical resistance at $1236/37. This region is defined by the 2013 low-week close, the 50% retracement of the July decline and November median-line parallel.” The level held as resistance into Thursday before giving way to an advance into objectives at $1248 and $1262/68. Friday saw prices stretch even higher into soft resistance at $1278. Look for a pullback early next week to offer favorable long-entries with the near-term outlook weighted to the topside while above $1248. A breach above resistance targets the 76.4% retracement of the July decline at $1294 and the upper median-line parallel of the November advance, currently just above the $1300-mark.