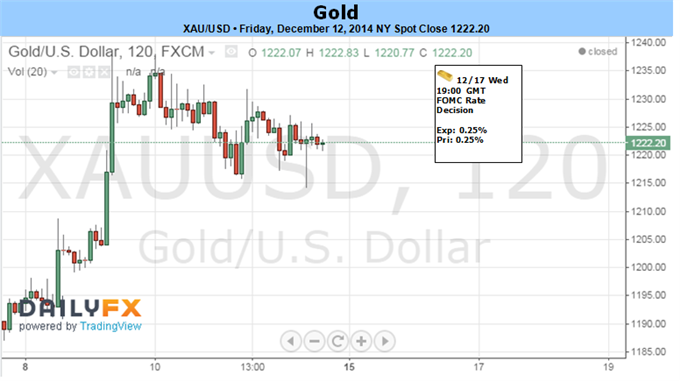 Gold prices are markedly higher this week with the precious metal rallying 2.5% to trade at $1222 ahead of the New York close on Friday. The advance comes amid a turbulent week for broader risk assets with global equity markets selling off sharply on global growth concerns. Weakness in the US Dollar and falling crude prices have further impacted risk appetite with gold well supported as investors sought alternative stores of wealth. Despite the gains however, prices continue to hold below a key resistance threshold with the near-term risk weighted to the downside heading into next week.

It was a rough week for equities with the SPX off more than 2.70% on the week as growing political uncertainty in Greece and concerns over the weakening outlook for global growth sparked a wave of profit taking. The accompanied sell off in crude prices, which hit lows not seen since 2009 on Friday, have continued to weigh on broader market sentiment, with gold catching a bid early in the week.

Looking ahead to next week, US economic data comes back into focus with the November Consumer Price Index and the highly anticipated FOMC policy decision on Wednesday. As officials anticipate weaker energy prices to boost disposable incomes for U.S. households, the recent pickup in job/wage growth may embolden the committee to take a more hawkish stance on monetary policy with speculation circulating that the central bank may look to remove the “considerable time period” language as it pertains to interest rates. Should the subsequent presser and updated growth projection show a more upbeat assessment, gold could come under pressure as investors begin to bring forward interest rate expectations. That said, the trade remains vulnerable near-term just below key resistance.

From a technical standpoint, gold has now pared 50% of the decline off the July high with the move into the $1237 target we noted last week . This level converges with a median line dating back to August 2013 and near-term the risk remains weighted to the downside while below this threshold. A breach above targets subsequent targets at $1248 and a key resistance range at $1262/68. Interim support rests at $1206 and $1196 with only a move sub-$1179/80 shifting the broader focus back to the short-side. Bottom line: longs at risk near-term sub $1237 with a pullback likely to offer more favorable long-entries lower down. A breach of the highs keeps the topside bias in play with such a scenario eyeing targets into the 200-day moving average.