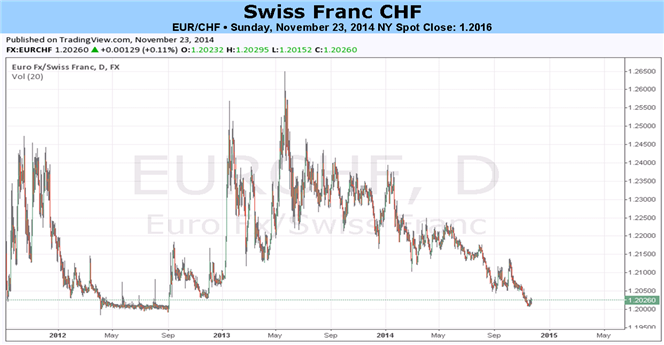 - Have a bullish (or bearish) bias on the Swiss Franc, but don’t know which pair to use? Use a Swiss Franc currency basket.

The Euro-Zone financial crisis and its resulting toll on monetary policy weren’t limited to the European Central Bank: the Swiss National Bank has been forced to act in tandem with the ECB since levying the Sf1.2000 floor on September 6, 2011.

Despite the ECB’s measures over recent months, continued weakness in the European single currency amid sustained disinflationary pressures has helped drive EURCHF lower into the end of 2014. We may however be on the verge of a paradigm shift if those underpinning the gold initiative garner a victory.

As the exchange rate creeps towards the Sf1.2000 floor, on November 30, Swiss residents will vote on a referendum that could force the SNB to increase its foreign reserve allocation to gold, up to 20% from the 8% level it currently resides at. Such a policy could prohibit the SNB from realizing their monetary policy mandate.

With interest rates now near zero, maintaining the floor has become the key to avoiding tightened monetary policy. Vowing to “enforce the minimum exchange rate with the utmost determination” the SNB has been purchasing euros against Swiss francs and is prepared to continue purchasing FX in unlimited quantities. So just how is the SNB maintaining the floor?

Although unconfirmed, they are likely to be selling FX options to keep volatility down in EURCHF as an additional way to manage the floor. Selling volatility also means that the SNB has forced the EURCHF option market to turn long gamma; the hedging activity of options dealers in theory would put a lid on so that the hedging of option dealers would help dampen the daily moves in the pair. This has worked even as EURCHF has approached the floor: the 20-day ATR has fallen from 24-pips on October 15 to 14-pips at close this week.

The big question is: what happens if there is a ‘yes’ vote? Even if the SNB is forced to reallocate its reserve portfolio, the transition is expected to take place over the course of 5-years, so the impact on the floor won’t be immediate – any action around the floor breaking right now is pure speculation and not due to the impending change in policy.

Secondly, even in the event of a ‘yes’ vote, the SNB wouldn’t necessarily need to just sell off its foreign reserves (most of which are euros) to shift the allocation; in an effort to maintain the floor, they could use the proceeds of their QE program instead to facilitate the slow transition, as Credit Agricole notes. The SNB will not simply reduce the size of its balance sheet, especially as the ECB moves into more aggressive easing policies.

If a vote of ‘no’ is upheld few additional options remain available to the SNB in their quest to preserve the minimum exchange rate. The market could see a continuation of the SNB adding euros to foreign reserves via the printing of additional Swiss francs. A cut in the interest rate into negative territory could also be witnessed, as the bank seeks to make investing in the Swiss currency less attractive.

A ‘no’ vote however, does not guarantee a massive covering rally—the market is already long. Very long, actually: the retail crowd is holding long EURCHF positions at a ratio of over 50:1 per the most recent SSI update. While the Swiss National Bank firmly stands on this side of the referendum, the outcome and resulting policy changes remains uncertain.

Bitcoin/Ethereum Outlook: BTC/USD, ETH/USD Weighed Down by the Fed