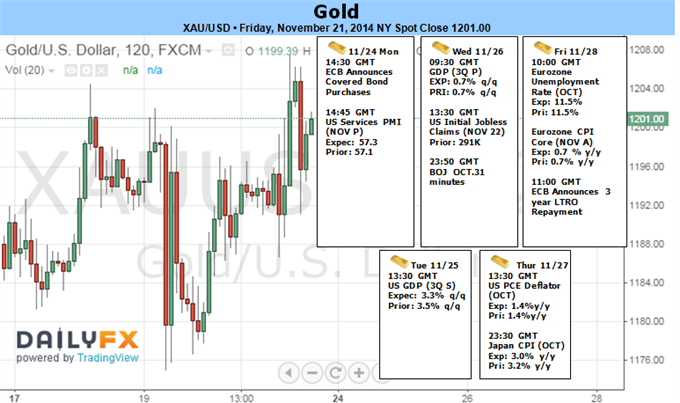 Gold prices are higher for a third consecutive week with the yellow metal rallying 0.8% to trade at $1197 ahead of the New York close on Friday. The advance comes on the back of dovish rhetoric out of the ECB and a surprise move from the PBOC to further ease monetary policy. Although recent fundamental developments are becoming increasingly supportive for gold, near-term the rally may be at risk as prices hold just below the 2014 open.

Gold prices stretched into fresh three-week highs on Friday after the People’s Bank of China made a surprise rate cut to its benchmark interest rates in an attempt to further support economic growth. The central bank lowered one year deposit rates by 25 basis points to 2.75% while one year lending rates were slashed by 40 basis points to 5.6%.

The announcement comes just as ECB President Mario Draghi renewed the central bank’s pledge to combat slow inflation in the region. In comments made at the European Banking Congress on Friday Draghi cited, “We will do what we must to raise inflation and inflation expectations as fast as possible, as our price stability mandate requires of us.” He went on to note that if further risks to the outlook materialize, the ECB remains posed to, “altering accordingly the size, pace, and composition of our purchases.” More accommodative monetary policies are generally supportive for gold as expectations for faster inflation stoke demand for the yellow metal.

With that said, the key event risks for the week ahead surrounds the Swiss Gold Referendum, where a ‘Yes’ vote could substantially change the composition of the Swiss National Bank’s balance sheet. The central bank would be forced to increase its holdings of the precious metal with the new guidelines, which could amount to a net CHF 66B in new purchases. Beyond the Swiss vote, the advance 3Q U.S. Gross Domestic Product report may also boost the appeal of bullion amid expectations for a downward revision in the growth rate, and the precious metal may remain well supported in the week ahead on the back of a weaker U.S. dollar.

From a technical standpoint gold continues to trade within the confines of a well-defined Andrew’s pitchfork formation off the November low with this week’s rally taking prices into key near-term resistance at $1206/07. This region is defined by the 2013 low day close and the 61.8% retracement of the decline off the October high. Note that the 2014 open came in at $1204 and this entire region of resistance remains paramount for the gold bulls. That said, the rally is vulnerable heading into this zone just above $1200 and we’ll take a neutral stance heading into next week. Look for a pullback off this mark with the near-term outlook weighted to the topside while above the median-line bisector. Key support rests at $1177/80 and we’ll reserve this threshold as our bullish invalidation level. Keep in mind that the monthly opening range broke to the topside last week and as such we should be looking for a late month high in prices. A breach of the highs is likely to see accelerated gains for gold with such a scenario targeting resistance objectives at $1237, $1250 and the 61.8% retracement of the July decline at $1262.