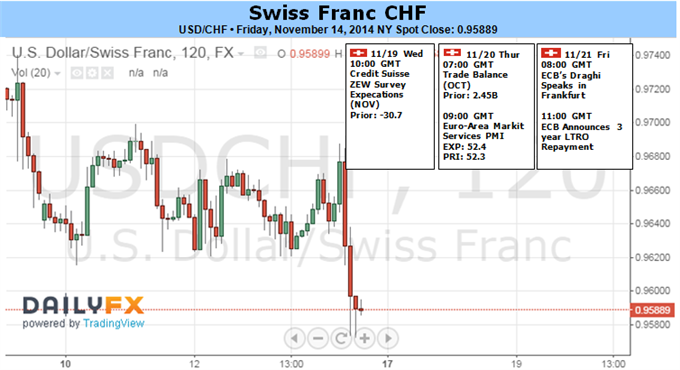 Swiss Franc Breach of 1.20 Against Euro Unlikely to See Follow-Through

The Swiss Franc has faded into the background as an object of speculation in its own right over recent years. A steady monetary policy centered on a commitment to maintain a EURCHF floor at 1.20 amplified the already significant historical correlation between the Swiss unit and the Euro, largely framing the outlook on the former currency in terms of developments with the latter. This may soon change as EURCHF flirts with breaching the SNB’s defenses on the eve of a crucial referendum whose outcome may be seen as undermining the central bank’s ability to respond.

Switzerland will take to the polls on November 30 to decide on a measure that would require the SNB to maintain 20 percent of its reserves as gold, which it would subsequently not be allowed to sell. The monetary authority would also have to repatriate the gold it owns but stores offshore (largely in the UK and Canada). As of September, the SNB held about 7.6 percent ($38.9 billion) of a total of $530.9 billion in reserves as gold. Using that as a baseline, getting to 20 percent would imply a purchase of an additional $106.2 billion in gold. The latest polling results ahead of the referendum published on October 31 showed 47 percent of respondents were against the initiative, 38 percent were in favor, and 15 percent were undecided.

The Swiss Franc may breach the 1.20 threshold against the Euro in the event of a “yes” vote. This initial response would reflect the newfound complications to maintaining the barrier. To date, the SNB has been able to defend its policy relatively easily because it can effectively “print” as much of its own currency as needed and use it to buy Euros in the market. Growing FX reserves in this way given a 20 percent gold holdings requirement would imply a large parallel purchase of the yellow metal. To avoid undermining their own EURCHF efforts, the SNB would have to use its non-Euro FX holdings to make this purchase. That has raised worries that the floor can only hold while the SNB has the stock of FX needed to maintain it and would eventually give way once reserves run out.

Such concerns seem misplaced. The latest SNB data shows it holds 53.2 percent of its reserves in currencies other than the Euro. The monetary authority has increased its total reserve holdings by an average of CHF7.2 billion per month since the introduction of the EURCHF floor in August 2011. Assuming this pace is maintained and adjusting for the additional outlay needed to bring current gold reserves to 20 percent of the total, the SNB would not run out of ammunition for close to 12 years. Considered together with the 5 years allotted to the central bank in the referendum terms to bring its gold position up to snuff, this means that no radical policy change need necessarily occur if a “yes” vote emerges. In practical terms, this suggests that if EURCHF dips below 1.20 on a short-term basis after the votes are counted, the move is unlikely to mark the beginning of a lasting downturn.