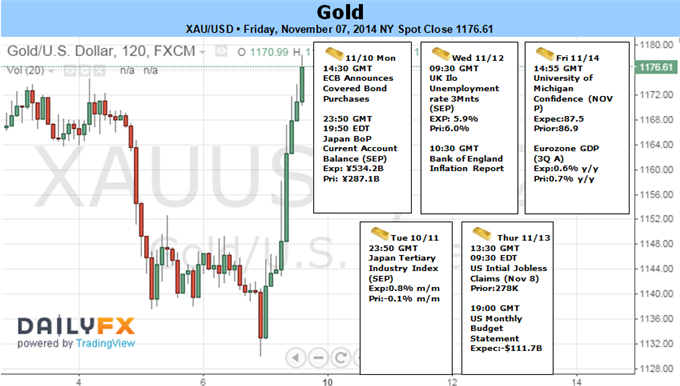 Gold prices were softer this week with the precious metal off by a mere 0.10% to trade at $1171 ahead of the New York close on Friday. Although this marks the third consecutive weekly loss, a substantial rally post NFPs on Friday pared nearly the entire weekly decline which saw gold off by as much as three percent. Although the immediate bias favors the topside targets in the days ahead, the correction is likely to remain capped as USD strength and the broader technical outlook keeps the focus on the short-side of the trade.

The release of the US October Non-Farm Payrolls on Friday was the main event this week with the data showing a gain of 214K jobs as unemployment ticked down to 5.8%. Although the print was slightly softer than the 235K consensus estimates, there was an upward revision of last month’s blowout read from 248K to 256K as the participation rate climbed to 62.8% after rebounding off its lowest levels since the late 1970s.

The release prompted a massive rally in bullion which posted its largest single-day advance since in nearly five months as the USD pulled back from fresh 5-year highs.

Despite the weaker-than-expected employment print, the macroeconomic developments due out next week may continue to heighten the appeal of the greenback amid growing concerns surrounding the global economy. Indeed, China CPI and Euro-Zone 3Q GDP may generate increased demand for the reserve currency as the U.S. growth prospects outpace its major counterparts. Looking ahead to next week investors will also be closely eyeing the US data flow with the Dow Jones FXCM US Dollar Index looking vulnerable near-term after failing to close the week above the 2010 highs.

From a technical standpoint, gold looks poised for further topside in the near-term with Friday’s price action posting a massive outside reversal candle. The snap-back from extremes in the momentum signature suggests this is likely to be a simple bear market rally with topside objectives eyed at $1180, 1192 & 1206/07 (where we would be looking for favorable short entries). Interim support stands at $1150 and is backed by $1125/30. Longer-term support objectives are eyed the 1.618% extension off the 2014 high at $1100. Bottom line: looking higher near-term for favorable short entries with only a breach above $1207 invalidating our broader directional bias.