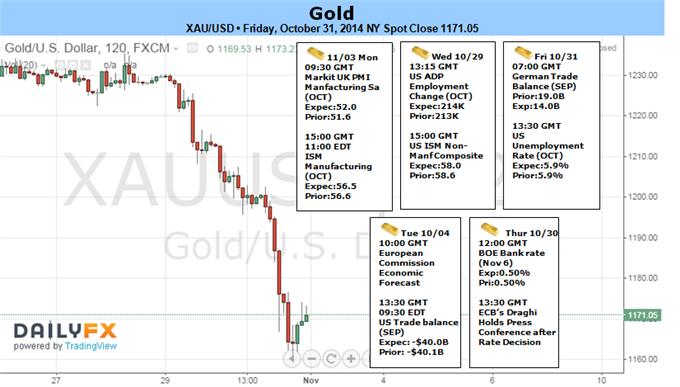 Gold prices plummeted this week with the precious metal off by more than 5.2% to trade at $1166 ahead of the New York close on Friday. The loss mark the largest single day decline since December 19th 2013 with prices now at the levels not seen since April 2010. Strength in the USD, improving US economic data and a fresh round of easing from the Bank of Japan is likely to keep gold prices under pressure with a near-term support structure coming into focus as we close out October trade.

The FOMC policy decision was central focus this week with the central bank announcing the cessation of QE operations amid an improving economic backdrop. The accompanying policy statement noted that, “The Committee judges that there has been a substantial improvement in the outlook for the labor market since the inception of its current asset purchase program,” and “Although inflation in the near term will likely be held down by lower energy prices and other factors, the Committee judges that the likelihood of inflation running persistently below 2 percent has diminished somewhat since early this year.” The remarks fueled a substantial rally in the greenback with gold breaking support at $1222 on the move. The next hit to bullion came on Friday after the BoJ announced a new round of quantitative easing. The surprise move sparked strength in risk assets with the Nikkei 225 advancing more than 4.8% on the session as gold continued lower into fresh 4-year lows.

Looking ahead to next week investors will be closely eyeing the US data flow with ISM, Factor Orders, and the highly anticipated Non-Farm Payrolls report on tap. Although the focus for Fed officials has seemingly shifted more so towards the inflation side, traders will be looking to confirm the central bank’s assertion of a substantiated recovery in the labor markets with consensus estimates calling for a print of 234K as unemployment holds at 5.9%. Look for stronger than expected US data points to continue fueling the dollar rally at the expense of gold. However, although our broader focus remains weighted to the short-side of the trade, near-term an upcoming technical feature around $1160 may offer some support for gold as we head into November trade.

From a technical standpoint, gold continues to trade within the confines of a well-defined Andrew’s pitchfork formation off the 2014 highs, with Friday’s low coming just shy of the bisector line. (note that this reaction line caught the October 6th low almost to the pip) Key support rests in the zone between $1151/60 where a longer-dating 1.618% extension off the all-time record highs stands. Subsequent support targets are eyed at $1125 and $1091/99. Initial resistance is eyed at former support at $1178/80 with key resistance now seen at $1206. We will reserve this level as our medium-term bearish invalidation level with breach above likely to prompt a period of consolidation in the bullion prices. Look for the November opening range to offer some clarity on our directional bias with our broader outlook remaining weighted to the downside sub-$1206. – MB