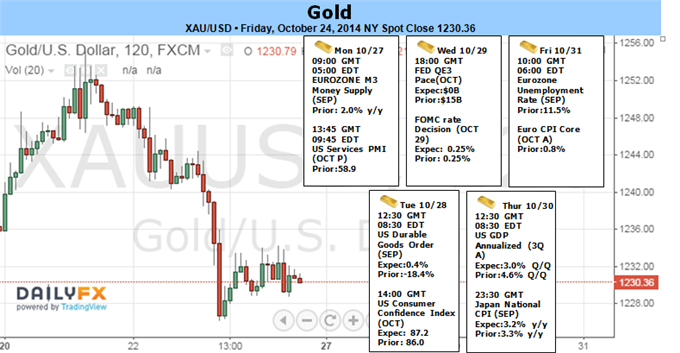 Gold prices are softer this week with the precious metal off by 0.55% to trade at $1231 ahead of the New York close on Friday. The losses come amid a sharp rebound in broader equity markets with the S&P 500 marking its strongest weekly performance since early January 2013. Although newswires remain largely dominated by Ebola headlines, markets have largely shifted focus with all eyes on next week’s key US event risk.

Looking ahead to next week, the FOMC policy meeting will be central focus with the central bank widely expected to end its asset purchase program. With headline CPI data this week coming in stronger than expected, close attention will be given to the verbiage of the accompanying policy statement as investors look for clues as to the Fed’s outlook on interest rates. The advanced read on 3Q GDP is released the following day with consensus estimates calling for a print of 3% q/q, down from the robust 4.6% q/q seen in 2Q. A hawkish tone to the policy statement on the back of the improving US data flow is likely to put pressure on bullion prices with the technical picture suggesting that prices remain vulnerable heading into the end of the month.

From a technical standpoint, gold reversed off of a key resistance range defined by the June close lows, the 38.2% retracement of the July decline and the 61.8% extension of the advance from the October low at $1244/48. Although the rally reached as high as $1255, prices failed to close above and the focus remains on this key resistance range. A breach above $1248 eyes more significant resistance at $1260/63 and $1283 where ultimately we would start looking for favorable short entries. Support rests with the 38.2% retracement of the monthly advance at $1222 with subsequent support objectives eyed at $1206 and $1178/82. It’s worth noting that while this week’s price action shifts our near-term bias to the short-side, the initial monthly opening range did break to the topside and another run at the highs cannot be ruled out before the broader downtrend resumes. Look for the FOMC rate decision to offer a catalyst here as we head into the close of the month with our attention shifting to the November opening range.