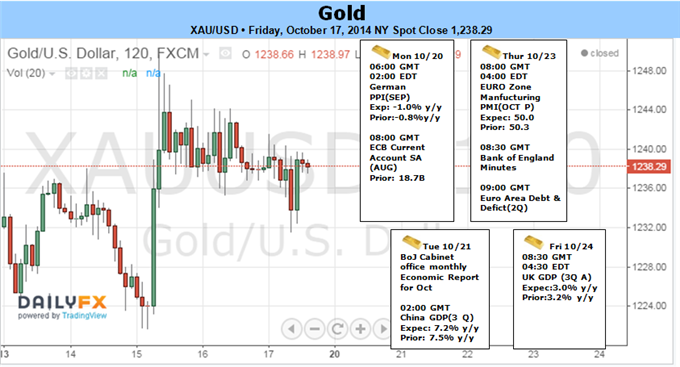 Gold Rally at Risk Amid Sticky US Inflation- $1222 Key Support

Gold prices pushed higher for a second consecutive week with the precious metal rallying 1.27% to trade at $1238 ahead of the New York close on Friday. The advance comes amid continued weakness in broader risk assets with all three major US indices down for a fourth consecutive week. Despite the risk-off environment, the key developments coming out of the U.S. economy may heavily impact gold prices next week after prices rebounded off key technical resistance mid-week.

Federal Reserve speakers have continued their Dovish rhetoric as the FOMC eyes the overwhelming disinflationary risks associated with a premature rate lift-off. Indeed, St. Louis Fed President James Bullard, who won’t be a voting member on the FOMC until 2016, undermined the bullish sentiment surrounding the U.S. dollar as the policymaker saw scope to extend the QE exit and we may see a growing number of central bank officials show a greater willingness to retain the highly accommodative policy stance for an extended period of time amid the subdued outlook for inflation.

As a result, the September consumer price index will largely be in focus next week, with consensus estimates calling for an uptick in the core reading to 1.8% y/y from a previous read of 1.7% y/y while the headline print is expected to downtick from 1.7% y/y to 1.6% y/y. With weakening energy prices, market participants may pay closer attention to the stickiness in core inflation as FOMC voting member Charles Plosser sees scope to normalize policy sooner rather than later.

From a technical standpoint, gold tested and defended a key resistance level noted in last week’s update at $1243/44. This region is defined by the 38.2% retracement off the July high, the June close low and is the confluence of two pitchfork resistance lines. Although the broader outlook for gold remains weighted to the downside, we cannot rule out continued strength into the monthly close on account of the monthly opening range break which was validated this week. Bottom line: near-term the trade remains constructive while above $1222 with only a break sub-$1206 putting the bears back in control. A breach above $1244 eyes more significant resistance at $1260/63 and $1283 where ultimately we would start looking for favorable short entries. - MB