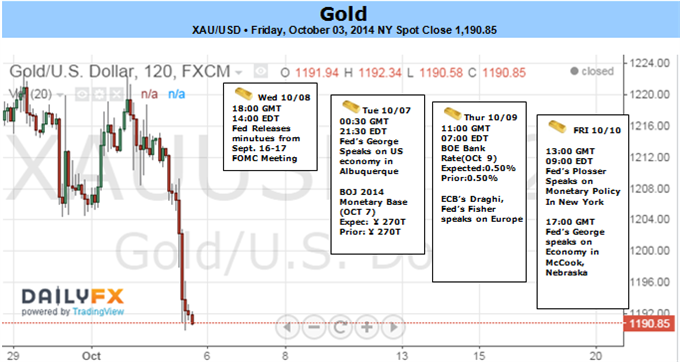 Gold prices are markedly lower this week with the precious metal off by more than 2.1% to trade at $1191 ahead of the New York close on Friday. The losses come on the back of a strong employment report with improving US data and continued strength in the greenback putting pressure on demand for the yellow metal.

Highlighting this week’s event risk was the release of the jobs report with The Bureau of Labor Statistics Non-Farm Payrolls report showing a gain of 248K jobs in the month of September. The data surpassed expectations for a print of just 215K and was accompanied by a surprise drop in the headline unemployment rate to 5.9% - marking the first sub-6% read since 2008. The data prompted renewed strength in the greenback with the Dow Jones FXCM USDOLLAR index pressing into fresh multi-year highs on speculation that the improving economic outlook may pressure the Federal Reserve to raise rates sooner than anticipated.

Looking ahead to next week, traders will be awaiting the release of the minutes from the September FOMC policy meeting on Wednesday. The latest committee meeting saw two dissenters for the first time since 2011 with the Dallas and Philadelphia Fed Presidents Richard Fisher & Charles Plosser opposing the central bank’s dovish forward guidance for monetary policy. Alongside the release next week will be a host of speeches by committee members and we’ll look further clues as to the possible timing and scope of rate hikes.

From a technical standpoint, gold continues to trade within the confines of a descending Andrew’s pitchfork off the March high with prices closing the week just above pitchfork support. Slight divergence has been identified in the daily momentum signature and while our broader outlook remains weighted to the short-side, near-term we’ll look for a reaction off this low. Bottom line- we’ll favor selling rallies while below the October opening range high at $1222 with a break of Friday’s low eyeing support objectives eyed at $1178/80 & $1151/60. A breach of the monthly high invalidates our bias with such a scenario targeting resistance at $1229 and the pitchfork bisector around $1243. Note that we are just opening up the October opening range and we’ll look for the break to offer further conviction on our medium-term directional bias.