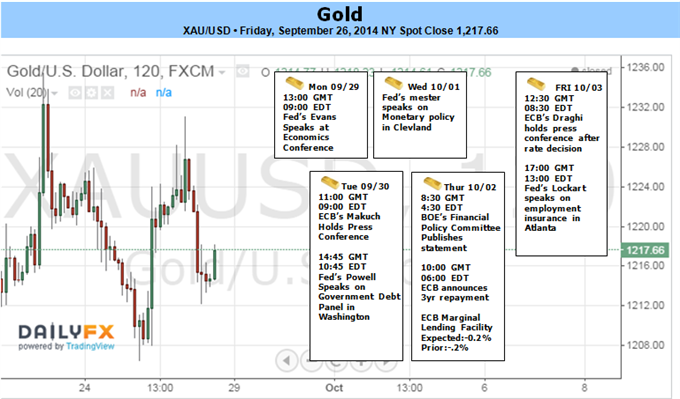 Gold prices are virtually unchanged this week with the precious metal off just a fraction of a percentage point to trade at $1213 ahead of the New York close on Friday. The decline marks the fourth consecutive week of losses for bullion as relentless strength the greenback and easing geopolitical tensions continued to weigh on demand. Month-to-date gold is off by 5.6% with prices down more than 8.4% quarter-to-date. As we head into the close of September trade however, the near-term outlook becomes

That economic docket picks up considerably next week with the European Central Bank interest rate decision and the US Non-Farm Payroll report highlighting the calendar. Expectations are that the ECB will unveil a massive stimulus package with some estimates calling the European version of QE to top 1Trillion Euros. The US employment report on Friday will central focus next week with consensus estimates looking for a 213K gain in September with the headline unemployment rate holding steady at 6.1%. Should the data disappoint, look for gold to likely remain supported in the near-term as the greenback takes a reprieve with the Dow Jones FXCM Dollar Index posting its 11th consecutive weekly advance this week as prices pushed into fresh 4-year highs.

While our broader outlook for gold remains weighted to the downside, we’ll take a more neutral stance as we head into the October open while noting that seven of the last ten years have seen strong performances in gold for the first week of Q4. Of those seven instances, bullion prices saw an average gain of 1.89% and as such, we’ll look to the October opening range for further guidance on our medium-term bias.

From a technical perspective gold defended a critical support target this week at $1206- a level defined by the close of the 2013 December 31st candle- which was the low day of the year. A break below this threshold targets support objectives at the 100% Fibonacci extension taken off the 2014 March high at $1193 and the 2013 stretch lows at $1178. Note that the momentum signature is back above the 30-barrier with a topside resistance trigger off the July highs pending. Near-term resistance is eyed at the June lows at $1240/43 with only breach above $1260 shifting the focus back to the long-side of the trade. -MB