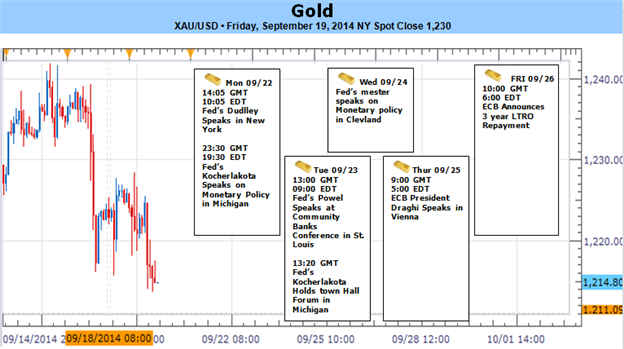 Gold prices are softer this week with the precious metal off by 1.13% to trade at $1215 ahead of the New York close on Friday. The decline marks the third consecutive weekly loss for bullion with persistent strength in the greenback keeping pressure on commodities based in US dollars. The losses were especially severe in the precious metals with platinum down 2.47%, palladium down 3.12% and silver down more than 4% on the week.

The FOMC’s September rate decision was central focus this week and fueled a surge in volatility as the Central Bank retained its pledge to keep its highly accommodative stance for an extended period of time. Even though the Fed’s updated forecasts showed a narrowing corridor from the June projection, interest rate expectations jumped as Richard Fisher joined Charles Plosser to vote against the dovish tone surrounding the forward-guidance for monetary policy. With that said, the final 2Q GDP report is expected to show another upward revision to reflect an annualized 4.6% rate of growth, and the data may further boost interest rate expectations as the growing rift within the committee suggests that the central bank may be preparing to shift gears at the October 29.

From a technical standpoint, gold broke below support at $1229 this week and our broader outlook remains weighted to the downside while below $1243. Note that a death cross has been identified with the 50-day moving average breaking below the 100 for the first time since late May. In that instance gold saw a near 4% decline before recovering in early June. Look for key support at $1203/06, a region defined by the December 31st close (day the yearly low was made) and the 88.6% retracement of the advance into this year’s high. A break below this level keeps our bias in play eyeing subsequent support targets at the 100% Fibonacci extension off the 2014 high at $1193 & the 2014 low at $1178. -MB