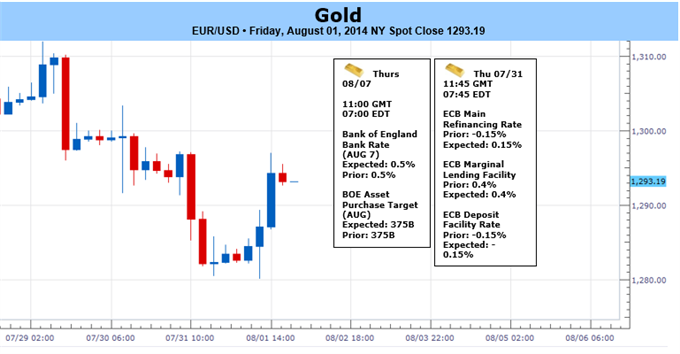 Gold prices are lower for a third consecutive week with the precious metal off by 0.90% to trade at $1295 ahead of the New York close on Friday. The losses mark a 2.47% decline for the month of July and come amid renewed strength in the greenback with the Dow Jones FXCM Dollar Index breaking through trendline resistance dating back to the 2013 high on the back of a stellar 2Q GDP print and a more upbeat assessment of the economy from the Federal Reserve. However with a miss on the July employment report and a massive sell-off in broader equity markets, the gold bulls may not be ready to give up just yet.

The release of the second quarter GDP figures on Wednesday fueled a massive rally in the US Dollar after the print showed an annualized growth rate of 4% q/q, far surpassing expectations of a 3% read. The release also saw an upward revision to the 1Q print from -2.9% to -2.1% with personal consumption and also topping market estimates. The FOMC interest rate decision released later that day further exacerbated the dollar’s move with the policy statement citing a more cautiously optimistic assessment of the labor markets and inflation while explicitly noting the reasons for the sole descent from Mr Charles Plosser, “who objected to the guidance indicating that it likely will be appropriate to maintain the current target range for the federal funds rate for "a considerable time after the asset purchase program ends," because such language is time dependent and does not reflect the considerable economic progress that has been made toward the Committee's goals.” The developments saw interest expectations bought in with the greenback mounting an offensive that took to the dollar index to highs not seen since April as US Treasury yields moved higher.

The July NFP report came in short of market expectations with a print of 209K missing calls for a read of 230K with the headline unemployment rate ticking higher to 6.2% from 6.1%. Despite the uptick however, it’s important to note that the move was accompanied by a broadening of the labor force with the participation rate moving up to 62.9% from 62.8% and an upward revision to last month’s blowout print NFP print from 288K to 298K. With the dollar seemingly well supported here, topside advances in gold are likely to remain limited with the biggest variable for gold traders being the recent sell-off in risk assets. Looking ahead to next week, traders will be closely eying the slew of central bank rate decision on tap with the RBA, BoJ, ECB and BoE on tap. Look for broader market sentiment to steer gold prices with a more significant sell-off in stocks likely to help support the battered metal in the near-term.

From a technical standpoint, the July calendar month proved to be a textbook opening range play with the break of the initial monthly lows on the 14th shifting the bias to the short side mid-month. The end result saw gold close July AT THE LOWS before rebounding off near-term support on the back of Friday’s NFP miss. Support now stands at the 61.8% retracement of the June advance at $1280 and this level will now serve as our initial range low as we open up August trade. Key support and our bullish invalidation threshold rests just lower in the zone between $1260-$1270- a region which is defined by key longer-term Fibonacci ratios and has served as a major pivot in gold dating back to June of 2013. Resistance stands at last week’s high at $1312 and is backed by our bearish invalidation level at $1320/21. Friday’s rally has now pared the entire Thursday decline and with the USDOLLAR index looking to post an outside reversal candle at fresh three-month highs, the risk for a near-term continued push higher in Gold (lower in USD) to open the month remains. As such, while our broader outlook remains weighted to the downside we’ll maintain a more neutral tone heading into the start of the month pending a break of the initial July opening ranged. Bottom line: looking for an early-mid month rally to sell.