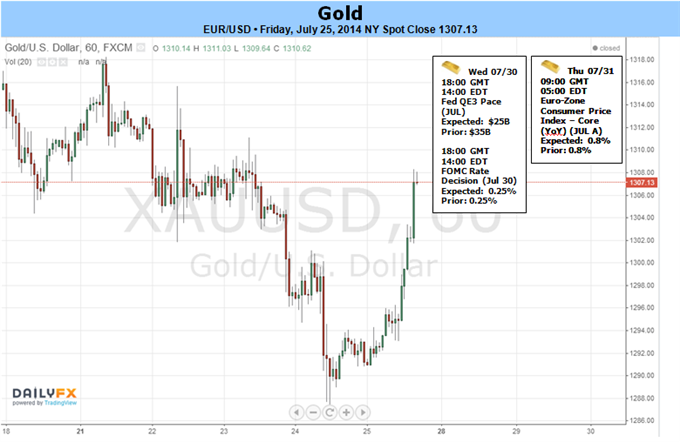 Gold prices are softer on the week with the precious metal off by 0.51% to trade at $1298 ahead of the New York close on Friday. The losses come amid continued strength in the greenback with the Dow Jones FXCM Dollar Index breaking into fresh monthly highs as equities struggled. However with the month close at hand, escalating geopolitical tensions abroad and a jam packed economic docket, our bearish bias is curbed as we close the week just above key support.

Looking ahead to next week, US economic data comes back into focus with 2Q GDP, the FOMC rate decision and non-farm payrolls on tap. Inflation data early this week was broadly in line with expectations with core CPI even missing expectations by 0.1% to print at 1.9% y/y. In light of last week’s Humphrey Hawkins testimony, where Fed Chair Yellen continued to cite a more cautious outlook on the economy, traders will be closely eying the advanced second quarter growth figures on Wednesday with consensus estimates calling for an annualized read of 3.0% q/q- a sharp rebound from the 2.9% q/q contraction seen in the first quarter. The FOMC policy decision is released later in the day with the central bank expected to stay on course with another $10billion taper in the pace of asset purchases. Look for the policy statement to drive price action should the Fed cite an improved labor market outlook on the back of last month’s blowout 288K print.

The July employment report highlights the docket next week with expectations calling for a print of 230K and a hold on the headline unemployment figure at 6.1%. The biggest threat to gold remains a stronger than expected read as such a scenario would likely see interest rate expectations fuel more strength in the greenback. On the other side, the most supportive scenario would be building geopolitical tensions in the Middle East and Ukraine. These events do pose a threat to broader market sentiment with gold likely the biggest winner if the situations were to deteriorate further.

From a technical standpoint, gold remains vulnerable below key resistance at $1321/24 with more definitive support at $1292/93. We will continue to eye this level as a key inflection point heading into the close of July trade with a break below targeting support objectives at the 61.8% retracement of the June rally at $1280 and a multi-year pivot zone around $1270. A topside breach/close above $1324 invalidates our near-term approach with subsequent resistance levels seen higher at $1335 the monthly high at $1345 and the 78.6% retracement of the decline off the March highs around $$1360.” We’ll maintain a more neutral stance as prices hold just above support into the close of the month with next week’s event risk and the August opening range likely to offer further clarity on our medium-term directional bias. -MB