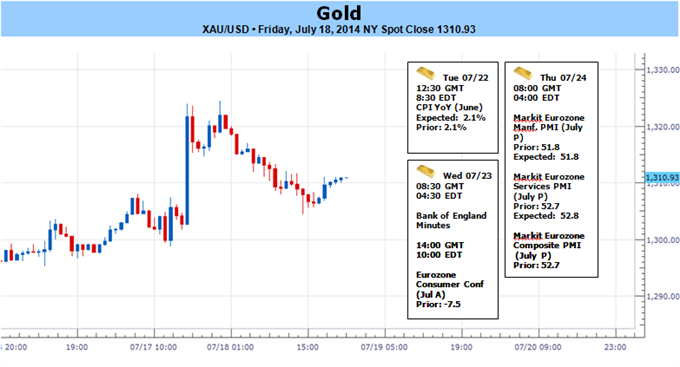 Gold prices are considerably lower on the week with the precious metal down more than 2.3% to trade at $1307 ahead of the New York close on Friday. The losses come amid a tumultuous week for markets with geopolitical tensions continuing to build both in Ukraine and Israel. A downed civilian airliner in Ukraine and an Israeli ground invasion of Gaza fueled a substantial rally in gold on Thursday as broader equity markets turned over. The subsequent gold rally halted at a key resistance range and while the technical picture here is a little murky, our baseline scenario is for further weakness in gold while sub $1324.

Looking ahead to next week, investors will be closely eyeing the release of the US Consumer Price Index (CPI) with consensus estimates calling for the headline reading to hold at an annualized rate of 2.1%. In light of the recent commentary from Janet Yellen in this week’s Humphrey Hawkins testimony, the central bank chair continued to suggest that the inflation outlook remains “noisy” due to temporary factors. However, a strong inflation print may undermine the Fed’s dovish tone as a growing number of central bank officials show a greater willingness to normalize monetary policy sooner rather than later. As a result we would need to see a significant deviation from market expectations for the data to spur a material shift in the Fed’s policy outlook. Should the inflation data come in stronger than expected, look for gold to trade heavy as interest rate expectations fuel strength in the greenback.

From a technical standpoint the outlook for gold remains clouded with a mid-week rally taking prices back above the initial July opening range low. That said, it’s important to note that our topside bearish invalidation level remains at the zone between the 38.2% extension off the 2013 low and the 61.8% retracement from this month’s high at $1322/24.This week’s rally met strong resistance at this threshold and near-term focus will favor the short-side of the trade while below this threshold. Interim support rests at $1305 and is backed by the confluence of the monthly low, the 50% retracement of the June rally, the 50-day moving average and trendline support off the June low at $1292. A break below this level further validates our broader directional bias with such a scenario eyeing subsequent targets into more significant support at $1270. A topside breach/close above $1324 invalidates our near-term approach with subsequent resistance levels seen higher at $1335 the monthly high at $1345 and the 78.6% retracement of the decline off the March highs around $$1360. We will maintain a neutral bias heading into next week’s CPI data while noting a greater inclination to sell while below $1324.