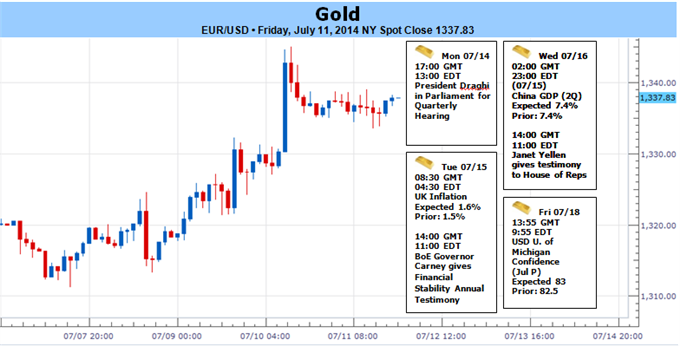 Gold Breaks Through July Range- Rally at Risk Ahead of Yellen

Gold prices are higher on the week with the precious metal up more than 1% to trade at $1335 ahead of the New York close on Friday. The advance marks the sixth consecutive weekly advance and comes on the back of a poor performance in broader equity markets and growing geopolitical tensions in the Middle East. Major US stock indices were off by more than 1% this week with European bourses shedding 3%-4% across the board amid concerns over the health of the Portuguese banking system. Although the rally in gold remains constructive, the sheer breath of the advance in combination with major central bank even risk next week has shifted our bias neutral in the near-term.

Looking ahead to next week, investors will eyeing the return of more pressing US data with retail sales, industrial production and the preliminary July University of Michigan confidence surveys. Taking center stage however will be Fed Chair Janet Yellen who will be speaking before congress next week in the Feds semi-annual Humphrey Hawkins testimony. With metrics in the labor markets continuing to improve and fears over rising inflationary pressures mounting, investors will be lending a keen ear to Yellen’s comments as the central bank comes under increased scrutiny over its prolonged accommodative stance. As such, look for topside advances in gold to remain limited in the near-term should interest rate expectations begin to factor in an early 2015 hike. That said, the technical outlook remains constructive above the July lows.

Back on the 20thof Junewe noted that the recent rally had, “broken through a confluence of key technical metrics including trendline resistance dating back to April, a longer-dating trendline resistance dating back to the 2012 high, the 61.8% retracement of the decline off the May high, the 200 & 50-day moving averages AND the weekly opening range high. Bottom line: the medium-term focus on gold shifts to the topside while above $1286 with a breach above key resistance at 1316/21 targeting the 61.8% retracement of the decline off the 2014 high at $1334.”

From a technical standpoint, this week’s rally took prices through the initial July opening range high which was just shy of the 61.8% retracement of the March decline at $1334. As such, we should be looking for a late-July high to offer selling opportunities. Interim support is now at $1334 with only a break below 1316 invalidating or medium-term constructive outlook. Look for resistance at $1356 with more substantial resistance seen at $1367/71. This level is defined by the March 17th close, the 61.8% Fibonacci extension taken from the advance off the 2013 low and trendline resistance dating back to the August highs.