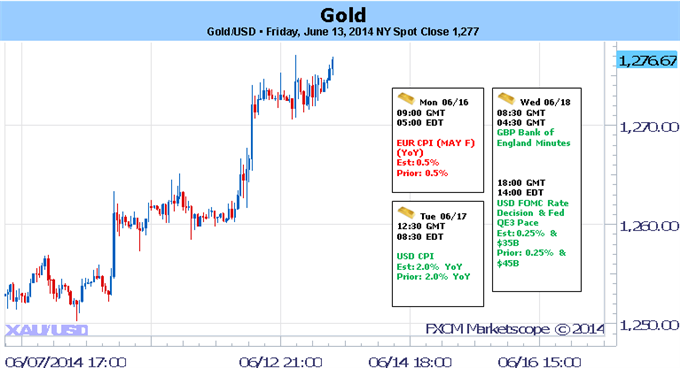 Gold prices are markedly higher on the week with the precious metal up 1.64% to trade at $1273 ahead of the New York close on Friday. The gains come amid losses in broader equity markets and continued weakness in the greenback with the Dow Jones FXCM dollar index making fresh monthly lows on Friday. Building geopolitical tensions in Iraq and Ukraine have offered some much needed support to gold prices which had fallen more than 10% off the March high.

Heading into next week the Federal Open Market Committee Monetary Policy meeting will be central focus as the Fed releases its quarterly economic projections as they pertain to growth, interest rates and inflation. Despite expectations for another $10Billion taper, the updated economic projections may have the greatest impact on markets as participants continue to weigh the timing of the first Fed rate hike. Should the updated forecasts undermine market expectations for a mid-2015 rate hike, look for gold to remain well supported with a break above interim resistance targeting levels just below $1300.

From a technical standpoint, gold looks poised to close the week above the $1270 threshold. For weeks now we have continued to target this region between $1260/70 as it's offered major pivots in price dating back to June of last year. Near-term resistance is eyed at the confluence of the 50% retracement from the May decline and the January High at $1277. A break back below $1260/70 shifts our focus back broader decline seen off the March highs with support targets seen lower at $1236 and $1214/16. With the monthly opening range yielding little in the way of technical clarity we will maintain a neutral stance heading into the FOMC rate decision on Thursday.