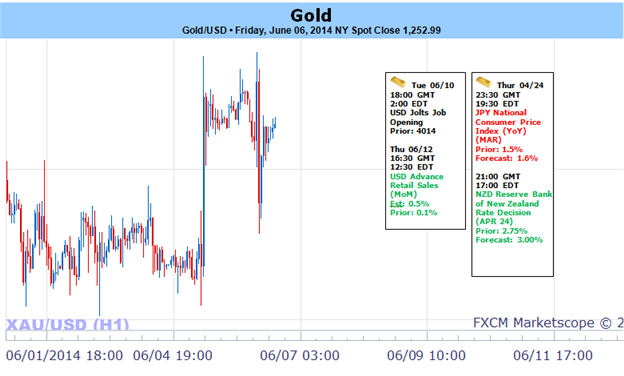 Gold prices firmer on the week with the precious metal up 0.21% to trade at $1252 ahead of the New York close on Friday. The advance comes on heels of shift in the European Central Bank policy outlook and continued strength in the US labor markets. Despite this week’s advance however, bullion remains at risk for further losses heading into June trade with the technical outlook looking for a June low to buy into.

The ECB interest rate decision spurred a 1% rally in gold as the Governing Cancel took unprecedented steps to shore up the monetary union. In one swift move the central bank decided to cut interest rates, offered another 4-year Long-Term Refinancing Operation (LTRO) and unveiled plans to conduct unsterilized Securities Market Program (SMP) purchases moving forward. Gold rallied through a tight weekly opening range on the news before stalling just ahead of key resistance at $1260/70.

The release of the US May non-farm payrolls on Friday offered little clarity on the gold trade with prices nearly unchanged on the day despite broadly positive employment print. The US economy created 217K jobs last month keeping the headline unemployment print anchored at 6.3%. Consensus estimates were calling for a 215K print with and expected uptick in the unemployment rate.

Heading into next week, traders will be eyeing data out of the US with retail sales and the preliminary June University of Michigan confidence surveys on tap. Moreover, broader market sentiment may continue to play a greater role in driving gold price action amid the material shift in the global monetary policy outlook.

From a technical standpoint, gold remains vulnerable for further declines while below the $1260/70 key resistance range. Our base case scenario is to look for a new low to buy into heading deeper into June trade with immediate support targets eyed at $1236 and $1216/22. Bottom line: our focus will remain weighted to the downside sub $1260 with a break below the monthly opening range low at $1240 targeting subsequent support targets into mid/late June. -MB