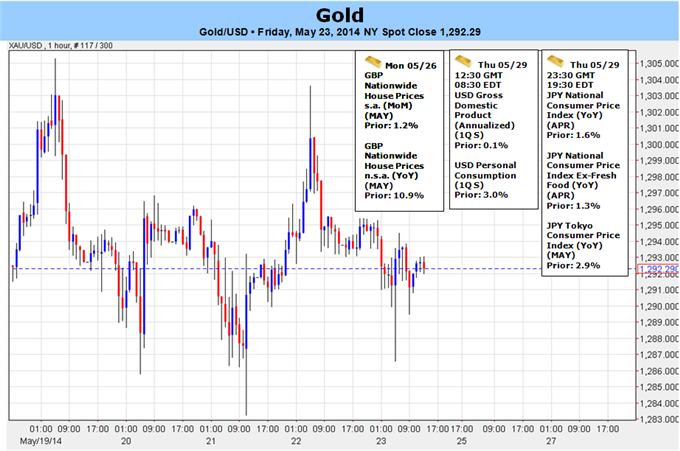 Gold Breakout Imminent- Will US GDP Be the Trigger?

Gold prices are virtually unchanged on the week with prices off by a mere 0.1% to trade at $1291 ahead of the New York close on Friday. Prices have continued trade within a tight range despite ongoing strength in the US dollar and broader equity markets. Nevertheless, gold remains at a critical juncture and the technical picture continues to suggest that a break of a multi-week consolidation pattern is imminent as we head into the close of May trade.

In light of the recent strong demand for US Treasuries, it’s disconcerting that although gold has largely moved in tandem Treasuries since the start of the year, it has been unable to participate in the bond rally since April. This condition suggests that the gold market remains vulnerable in the near-term and with the long bond coming off key near-term resistance at the 61.8% retracement from the decline off the 2012 record highs, further weakness in Treasuries could put added downside pressure on gold prices.

Looking ahead, the preliminary 1Q GDP print highlights the biggest event risk for the week ahead with consensus estimates calling for a downward revision to reflect an annual contraction of 0.5% q/q. With that said, a dismal growth read may dampen the appeal of the US Dollar and spur increased demand for gold as interest expectations get pushed out. Watch for developments in the bond market and the greenback for guidance with the recent price action in gold warning of a decisive move heading into the monthly close.

From a technical standpoint, our outlook remains unchanged from last week. “Gold has continued to trade into the apex of a multi-week consolidation pattern off the April highs and a break-out ahead of the May close is in focus. A break below 1260/70 is needed to put the broader bearish trend back into play targeting $1216/24 and the 2013 lows at $1178. Interim resistance and our near-term bearish invalidation level stands at $1307/10 with a move surpassing $1327/34 shifting our broader focus back to the long-side of gold. Bottom line: look for a decisive break of this pattern next week with a move surpassing the May opening range to offer further clarity on our medium-term directional bias. The broader outlook remains weighted to the downside sub $1334. -MB