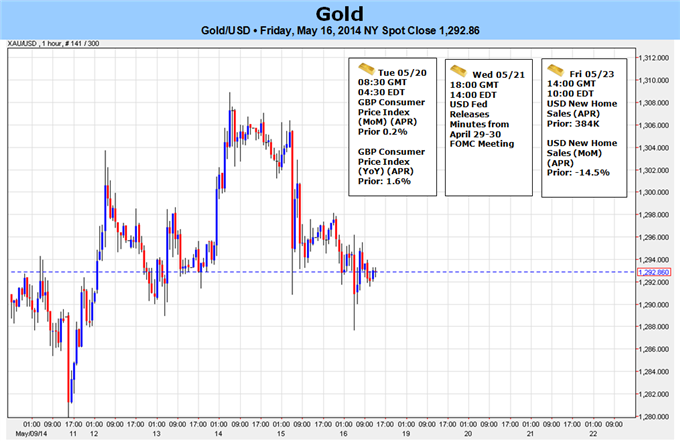 Gold prices are marginally higher this week with the precious metal inching up 0.18% to trade at $1291 ahead of the New York close on Friday. Bullion has held a tight range for some time now and while our immediate bias remains neutral, a clear setup presents itself as we head into next week with the technical outlook warning of a possible near-term break in gold prices.

Broader market sentiment remains uneasy heading into the weekend with all three major stock indices closing markedly lower on the week as the yield on the US 10Yr dropped to its lowest levels since October 2013 at 2.47%. The key data print came on Thursday with the US consumer price index showing an uptick in both m/m and y/y core CPI. The data could begin to undermine the Fed’s dovish tone and with the labor market recovery seemingly on proper footing, the inflation outlook is likely to remain central focus for the central bank moving forward.

Looking ahead to next week, the release of the minutes from the April FOMC policy meeting will be central focus as investors continue to search for clues as to the central bank’s outlook on interest rates. Highlighting the economic docket next week will be an update on the housing market with existing homes sales on Thursday and New home sales on Friday. Data on Friday showed housing starts jumped 13.2% m/m in April, far surpassing expectations for a gain of just 3.6% m/m and strong data next week could further weigh on gold as prospects for policy normalization from the fed begin to take root. Existing home sales are expected to rise by 2.1% m/m after a 0.2% contraction in March with consensus estimates calling for new home sales to jump by 10.6% m/m, rebounding from a contraction of more than 14% the previous month.

From a technical standpoint, gold has continued to trade into the apex of a multi-week consolidation pattern off the April highs and a break-out ahead of the May close is in focus. A break below 1260/70 is needed to put the broader bearish trend back into play targeting $1216/24 and the 2013 lows at $1178. Interim resistance and our near-term bearish invalidation level stands at $1307/10 with a move surpassing $1327/34 shifting our broader focus back to the long-side of gold. Bottom line: look for a decisive break of this pattern next week with a move surpassing the May opening range to offer further clarity on our medium-term directional bias. The broader outlook remains weighted to the downside sub $1334. –MB