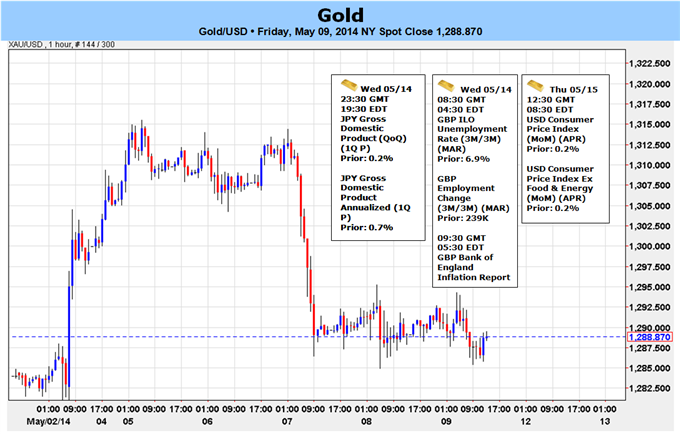 Gold prices are softer for the second consecutive week with the precious metal off by nearly 1% to trade at $1287 ahead of the New York close on Friday. The losses come on the back of a broad-based USD rally that saw the Dow Jones FXCM USDOLLAR index reverse off fresh 6-month lows, paring the entire April decline by the end of the week. The index is now virtually unchanged since the monthly open and traders will be looking ahead to next week’s docket as the US data front picks back up.

The calendar was light for the US this week with gold prices giving up early gains after Fed Chair Janet Yellen noted in her testimony before congress that the central bank’s accommodative stance was warranted given the relative strength of the labor markets and subdued inflation metrics. The greenback regained its footing with a rather dovish ECB President Mario Draghi on Thursday further supporting the dollar rebound. The subsequent rally has continued to weigh on gold prices which look to close the week just off the low.

Looking ahead to next week, US data will be back in focus on the heels of this week’s Yellen testimony with Retail Sales, the Consumer Price Index (CPI) and Industrial Production on tap. Inflation figures on Thursday may prove pivotal for bullion with consensus estimates calling for a slight increase in the y/y and m/m prints with core CPI expected to fall to 0.1% from 0.2% m/m and hold at 1.7% y/y. Should the data show a faster-than-expected pace of price growth, look for gold prices to come under pressure as expectations for a 2015 Fed rate-hike take root.

From a technical standpoint, gold completed a 100% Fibonacci extension off the April lows with this week’s push into the $1310 barrier. The subsequent reversal has continued to be supported by the 100-day moving average, currently around $1287 and a break below this level puts back into focus key support at $1260/70 (bullish invalidation). That said, we cannot discount another assault on the highs as we continue to hold within the initial May opening range with a breach above $1310 suggesting that a more significant low may have been put in last month. Such a scenario looks back to a region defined by last month’s high and the 50% retracement of the March sell-off at $1327/34. With the current positioning and key US inflation data on tap next week, we will maintain a neutral stance into the open with the Sunday/Monday opening range likely to offer further clarity on a near-term directional bias. –MB