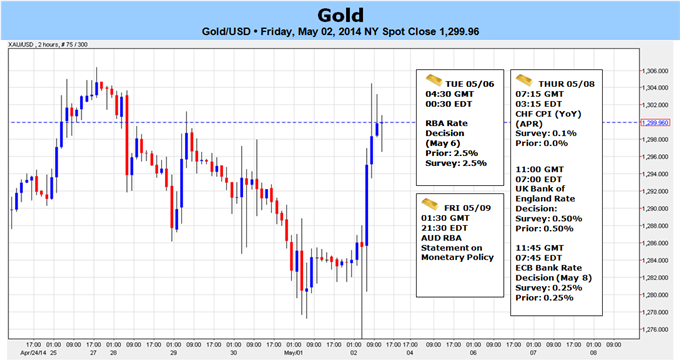 Gold prices are softer on the week with the precious metal off by 0.42% to trade at $1300 ahead of the New York close on Friday. The week was marked by continued weakness in gold prices as equities rallied into fresh record highs. The shift came on Friday however, with gold prices reversing course just ahead of key support on the back of a stellar US labor report. Note despite the volatility, gold prices saw little change in April with a gain of just $7 on the entire month. While our longer-term market view remains weighted to the downside for gold, recent price action suggests we should be looking higher heading into the start of May trade.

The April non-farm payroll report highlighted the economic docket this week with employment gauge showing a gain of 288K jobs last month, pushing the headline unemployment rate to 6.3%, its lowest levels since September of 2008. Despite the better than expected headline print, it’s important to take note that the civilian labor force contracted by some 800K workers, bringing the participation rate down to its lowest level since December at 62.8% (a 35-year low). Gold initially spiked lower before quickly rallying back towards the weekly highs on the heels of the release. Although the report topped estimates, a dismal 1Q GDP print earlier in the week and lackluster housing data is unlikely to prompt any change in the Federal Reserve’s outlook and as such, gold could remain supported in the near-term as Yellen maintains a dovish stance on monetary policy.

The economic docket will be rather light next week with only ISM non-manufacturing and trade balance data on tap for the US. Look for comments from central bank Chair Janet Yellen to possibly impact market sentiment as she testifying before the joint economic congressional committee on Wednesday and the senate budget committee on Thursday. That said, we’ll look for broader market sentiment to steer prices with the technical picture offering further clarity.

From a technical standpoint, gold now looks poised for a near-term recovery higher after posting a key outside day reversal ahead of a critical support at $1260/70. This level is defined by the March opening range low, the 23.6% Fibonacci extension taken from the advance off the December 31st low and the 61.8% retracement of the advance of the December low. The rally also took prices through trendline resistance dating back to the 2014 high set on March 17th (interesting to note- that was also a key outside day reversal). As such, or immediate focus is on interim resistance at the 61.8% retracement of the decline off the April highs at $1307. We will use this level as our near-term bearish invalidation point with a breach above targeting more critical topside resistance targets at $1327/34. A breach surpassing this threshold would suggest that a more significant low was put in last month with such a scenario targeting levels back towards the $1400 threshold. Note that a break and close below $1260 is required to put the broader down-trend back into focus targeting the 2013 lows at $1178. -MB