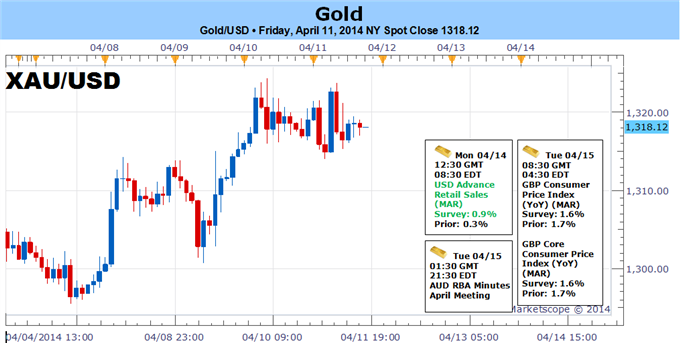 Gold is up 1.1% on the week with the precious metal trading at $1318 ahead of the New York Close on Friday. The rally comes on the back of a substantial sell-off in broader risk assets with US stock indices off by 2-3% across the board. Gold prices have found support on risk-aversion flows and Fed rhetoric after coming off seven week lows at $1277. The advances are likely to remain limited however as the technical picture keeps the broader focus weighted to the downside.

The release of the minutes from the March FOMC policy meeting noted that several Fed officials said ‘forecasts overstated the rate rise pace,’ suggesting that the central bank does in fact expect to keep rates anchored well after the cessation of QE. Remarks by Philadelphia President Charles Plosser, a voting member this year, further reinforced the central bank’s stance, saying that the ‘dot forecasts are not the FOMC consensus.’

Interest rate expectations were subsequently pushed out, offering support for bullion as the greenback came under tremendous pressure. The Dow Jones FXCM Dollar Index (Ticker: USDOLLAR) fell to levels not seen since October with a decline of more than 1.2% heading into the close of the week. However, with the US docket picking up next week, the greenback may find some support, limiting the fuel needed to sustain the gold rally.

Traders will be closely eyeing key US data prints next week including retail sales, the consumer price index (CPI), housing data and the release of the Fed’s Beige Book. Inflation data on Tuesday is expected to show a n increase in the pace of year on year price growth to 1.4% from 1.1% with core and m/m inflation expected to hold steady at 1.6% and 0.1% respectively. The updated assessment of the Fed’s twelve districts on Wednesday will likely highlight the week’s docket as investors look for signs that the recovery remains on firm footing.

From a technical standpoint, gold remains at risk below the March opening range low at $1327, with only a move surpassing $1348 shifting our focus back to the topside. This level represents the 61.8% retracement of the decline off the March highs and would require a breach back above the 2012 trendline resistance we broke last month. Bottom line: we’ll be looking for short triggers next week to offer favorable entries targeting objectives into $1270 with only a breach/close above $1327 invalidating our medium-term bias. Such a scenario eyes a break above $1348 to put resistance objectives at $1366, $1383 and $1408 in view. –MB