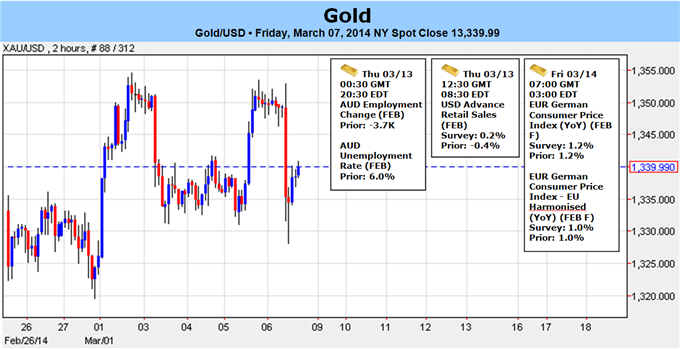 Post NFP Break Below $1330 May Signal Gold Top in Place

Gold is firmer at the close of trade this week with the precious metal up by nearly 1% to trade at $1335 ahead of the New York close on Friday. Tensions regarding the ongoing geopolitical dispute in Ukraine propped up gold prices early in the week with spot turning just ahead of technical resistance at $1357. Gold has since traded within the March 3rd range with major US economic data on Friday offering little support for the 2014 rally.

The US employment report on Friday was the highlight of the week with non-farm payrolls adding 175K jobs last month, toping expectations for a print of just 149K. The unemployment rate unexpectedly rose to 6.7% from 6.6% and while this would typically be seen as a negative, the move was accompanied by a broadening in the civilian labor force- a factor that will inherently elevate the headline rate. Gold immediately came under pressure on the release as concerns over the widely debated impact weather had on jobs abated. That’s said, it’s likely the Fed will continue tapering QE purchases as expected and the bid for gold (at least from an inflation standpoint) is likely to be limited barring any additional geopolitical risk.

Looking ahead to next week, investors will be closely eying retail sales data and the preliminary March University of Michigan confidence numbers. Gold prices are likely to take direction from broader market sentiment with our attention shifting on the USDOLLAR’s recent rebound at key Fibonacci support on Friday at 10,508. Should this rebound materialize into a more substantial advance, look for gold prices to remain under pressure.

From a technical standpoint, gold remains at risk below key resistance at $1357/61 with a clean monthly opening range highlighting support into $1330. Look for a decisive break of this range mid-next week to offer clarity on a medium-term bias heading into March with our immediate focus against the $1357/61 resistance range. A daily RSI support trigger looks to have been broken on Friday’s decline and a move below the March opening range puts support targets into view at $1320 and $1300/06 where more substantial demand is expected. Only a break below the $1268/70 support level would put the broader decline off the 2012 high back into play while noting that a break above the $1361 threshold suggests that a much more significant low was put in place last December. Such a scenario would eye topside objectives towards the August highs at $1433.