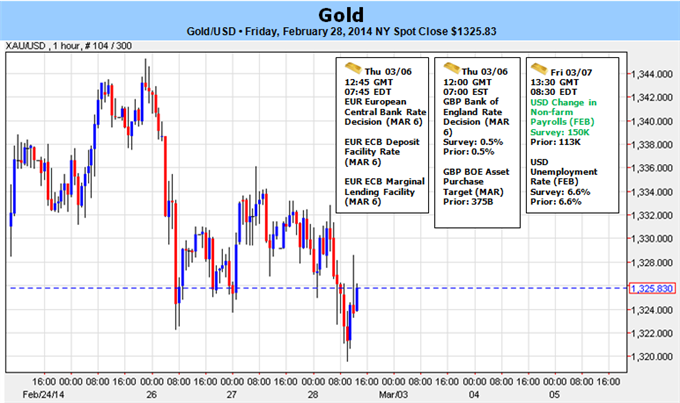 Gold at Resistance Heading Into March- All Eyes on Central Banks, NFPs

Gold prices were virtually unchanged on the week with prices holding just below key resistance to trade at $1322 ahead of the New York close on Friday. Prices have remained well supported throughout the month as softening data out of the US & China kept pressure on the greenback. Equity markets seemed unfazed however with all three major US stock indices closing markedly higher on the week.

For those still calling the recent moves in gold and the USD a “risk off” move, it’s important to note that equity prices have remained well supported with the S&P 500 closing at fresh record highs on Friday. That said, the weak string of data prints recently indeed has increased speculation that the Federal Reserve may need to easy back its taper plans as the recovery slows. During her testimony before the senate this week, Federal Reserve Chair Janet Yellen highlighted that while the central bank remains committed to its accommodative stance, bond purchases are ‘not on a preset course’ and the committee is poised to adjust the taper as needed. Such expectations are likely to remain supportive of gold / heavy for the greenback in the near-term.

Heading into next week, central focus will be on key central bank rate decision from the RBA, BoC, ECB and the BoE with the highly anticipated US non-farm payroll report wrapping up the week on Friday. Consensus estimates are calling for the addition of some 150K jobs for the month of February with the headline unemployment rate widely expected to hold at 6.6%. As always, we will want to pay close attention to the deeper metrics of the report as we have seen larger contractions in the labor force push the participation rate to its lowest levels since the 1980s back December. Such factors have continued to put artificial downside pressure on the headline unemployment rate and as Chair Yellen noted this week, continues to understate the broader health of the labor markets.

From a technical standpoint, the gold trade remains vulnerable below key resistance at $1336/38 heading into the open of March trade. The level is defined by the 100% Fibonacci extension taken from the advance off the December low and the 61.8% retracement of the decline of the August high. More importantly, a longer dated trendline resistance dating back to the 2012 high comes in just beyond this level and if compromised, would represent major shift in the gold trade. The precious metal has now posted its largest monthly advance in since July and closes the February month at levels not seen since early November with this week’s price action putting in a doji formation just below resistance. Interim support rests at $1302/7 where the 23.6% retracement of the rally off the December low, last week’s low and the 200-day moving average come into play. We will maintain a neutral stance heading into the March opening range while noting that a breach above this week’s high does risk a more substantial rally in the metal with such scenario eyeing topside targets at $1361 (October high), 1400 and 1415. Only a move sub-1268/70 invalidates the broader rally seen since the start of the year. -MB