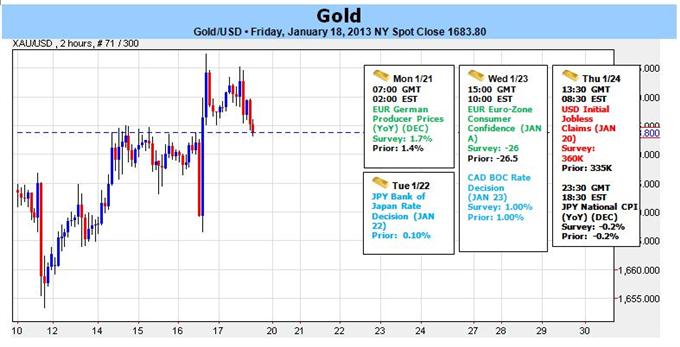 - Commodities: Gold, Oil Vulnerable as All Eyes Turn to Bernanke

Gold continued its advance from last week with the previous metal advancing 1.53% to trade at $1688 at the close of trade in New York on Friday. The advance has taken bullion into key resistance at $1693 as global equity markets pushed to multi-year highs and commodities rallied on the back of strong economic data out of the US and China. Housing market data this week offered further evidence that the pace of the recovery is gathering with December housing starts surging 12.1% m/m, up from a previous decline of 3% in November as initial jobless claims fell to their lowest levels since early 2008. On Thursday, GDP data out of the world’s second largest economy came in stronger than expected with a print of 7.9 %, easing concerns regarding a potential ‘hard landing’ in China. The headlines have continued to support risk with gold prices tracking broader risk sentiment throughout the week.

Inflation data this week showed the pace of price growth in the US holding steady with the year on year print coming in below expectations at 1.7% (vs. Expected 1.8%) from a previous read of 1.8%. Although the data continues support the Fed’s official statement that inflation expectations remain “broadly balanced”, various Fed officials have continued to vocalize their concern that current central bank policy may stoke inflationary pressures down the road. Still, in the near-term Bernanke has remained steadfast in his convictions with the chairman noting that inflation expectations remain ‘well anchored’ and that the US was ‘on track’ to stay at or below the 2% target. As such, we remain cautious on gold here in light of the recent rally off the monthly lows while noting that a break of near-term technical resistance may be in the cards should the rally in risk assets persist.

Looking ahead to next week, gold traders will be anticipating the latest release of the IMF World Economic Outlook for an updated forecast on growth prospects around the globe. Look for gold to react accordingly with an upbeat assessment offering support for the broader commodity rally as economic activity continues to improve. A downbeat outlook could trigger a correction in risk assets with such a scenario likely to fuel a rejection of key support just above current levels.

From a technical standpoint, gold remains at risk so long as the $1693 threshold is respected. This level is defined by the long-term 61.8% Fibonacci extension taken from the December 2011 and May 2012 lows and has served as a clear pivot in price action dating back to early 2012. Note that prices have continued to trade within the confines of a descending channel formation dating back to the October high with a move past the 100-day moving average at $1716 needed in order to deem gold as stable. Near-term support rests with the 200-day moving average at $1662 with critical support seen in the region between the 100% Fibonacci extension taken from the October/ November highs and the 61.8% retracement of the rally from the 2011 low (lowest level of the move off the record high) at $1626- $1630. Daily RSI has now reached its highest levels since November 27th with the oscillator flattening out just ahead of the 60-threshold. The last time we saw the 60-threshold compromised was on August 21st which was the onset of the breach above $1626 that took us into the November highs just shy of $1800. Look for gold to range early next week with a slight bias to the downside so long as key resistance at $1693 remains intact. -MB