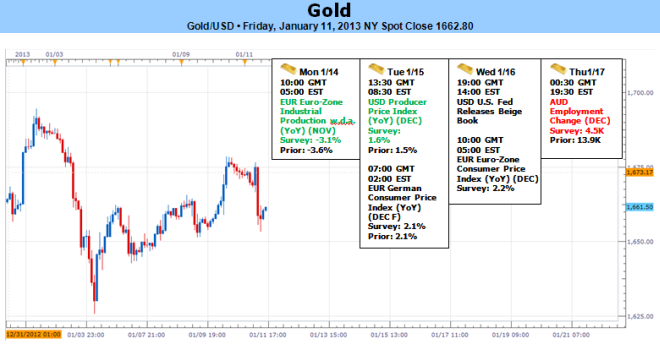 Gold was firmer at the close of trade this week with the precious metal advancing 0.23% to trade at $1659 at the New York close on Friday. A rally off last week’s tag of critical support at $1627 encountered resistance at a near-term trendline dating back to the November highs with bullion paring nearly the entire week’s advance to close the week just below the 200-day moving average. While longer-term prospects for gold look for support on rising concerns over the Fed’s prolonged accommodative stance and its potential impact on inflation, our near-term outlook remains weighted to the downside with a break below $1627 risking substantial losses for the yellow metal.

Looking ahead to next week, gold traders will be closely eyeing inflation data out of the US on Tuesday and the release of the Fed’s Beige Book on Wednesday for an updated assessment of the economic conditions in the Fed’s twelve districts. Although the US consumer price report is expected to show the headline and core rate of inflation holding steady in December, a stronger than expected print could offer some support to gold prices on concerns over rising inflationary pressures. Indeed this week we did hear rhetoric from numerous Fed officials including Esther George (who is a voting member this year) who noted that, “a prolonged period of zero interest rates may substantially increase the risks of future financial imbalances and hamper,” the Fed’s scope to preserve the 2% target. However with the projections released at the last FOMC policy meeting showing a sub 2% inflation expectation from the majority of the members, it’s unlikely gold will find material support in the near-term.

From a technical standpoint, gold has continued to trade within the confines of a well-defined descending channel formation dating back to the October highs with bullion rebounding sharply off critical support in the region between $1627 and $1630 last week. This range represents the near-confluence of the 61.8% retracement of the rally from the 2011 low (lowest level of the move off the record high) and the 100% Fibonacci extension taken from the October/ November highs and has served as a clear pivot in price action since the start of 2012. The $1627-threshold remains paramount for the yellow metal with a weekly close below this level paving the way for further declines into the 138.2% extension at $1585 and the region between the 1.618% extension and the 61.8% long-term extension from the all-time highs and the 2012 highs at $1550-$1555. The RSI signature continues to suggest bearish momentum in the near-term with the oscillator rejecting advances in to the 60-threshold while continuing to hold below trendline resistance dating back to September. A breach above this trendline in the RSI indicator may fuel a near-term rally back into key resistance at the 61.8% Fibonacci extension taken from the December 2011 and May 2012 lows at $1693. Only a close above this mark alleviates near-term weakness in gold with an advance above the December high at $1723 needed for us to consider gold as stable. -MB