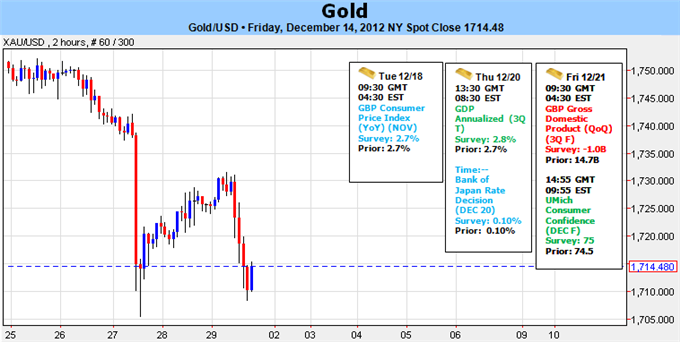 Gold prices were slightly softer at the close of a volatile week with the precious metal off by 0.52% to trade at $1695 at the close of trade in New York on Friday. Although this week’s rejection of $1723 (38.2% retracement from November advance) casted a bearish tone, bullion has continued to hold just above near-term Fibonacci support at $1693 with a break below this level (on a close basis) opening up the floor to further declines.

On Wednesday Bernanke announced a significant shift in the central bank’s easing policy with the chairman pledging $85Billion a month in liquidity injections at the conclusion of operation twist at the end of this year. The Fed now looks to maintain its accommodative stance so long as inflation remains below 2.5% and unemployment remains above 6.5%. However with the individual FOMC projections suggesting that inflation will run at or below 2% in the long-run, the focus will remain fixated on the labor market. As such, dollar strength may remain limited in the short-run until there is significant improvement in the unemployment rate and as a result, gold may hold near-term support.

Richmond Fed President Jeffrey Lacker reiterated his concerns regarding current monetary policy on Friday, noting that the central bank’s prolonged asset buying program risks a run-up in inflation. Although Bernanke and company have asserted that inflation expectations remain anchored with projections from the voting FOMC members on Wednesday suggesting that policy makers see no threat of run-away inflation on the horizon, Lacker postulates that “monetary policy has only a limited ability to reduce unemployment, and such effects are transitory and generally short-lived.” As such, Lacker notes that “‘further monetary stimulus runs the risk of raising inflation and destabilizing inflation expectations.”

At the same time, Dallas Fed President Richard Fisher warned that the central bank, “may never be able to leave this position” as the committee introduces a ‘qualitative guidance’, and stated that the FOMC’s “efficacy is declining over time” as Chairman Ben Bernanke continues to embark on quantitative easing. The opposing views reflected by these remarks speaks to the uncertainty facing policy makers as they continue to undertake unprecedented measures in an effort to further support the fragile recovery. Looking ahead to next week, traders will be closely eyeing the final read on 3Q US GDP with consensus estimates calling for an annualized print of 2.8%, up from a previous read of 2.7%. However with the Fed having explicitly stated that policy is to remain accommodative until the labor markets improve, more emphasis will be placed on employment metrics as we head into 2013 with gold declines likely to be limited on concerns over the Fed’s aggressive easing stance.

From a technical standpoint, gold remains at very precarious levels with the yellow metal closing just above the key 61.8% long-term Fibonacci extension taken from the December 2011 and May lows at $1693. We have continued to cite this key threshold for weeks now with gold unable to hold any meaningful declines below this level. Gold remains within the confines of a descending channel formation dating back to the October highs with daily RSI continuing to hold just above the 40-threshold. A break below this mark on the oscillator coupled with a break below Fibonacci support at $1693 exposes subsequent support targets at the November lows at $1673 and the 200-day moving average at $1661. The next area of focus below this level is the 38.2% extension at $1630, a level which has served as a key pivot in price action dating back to 2011. As we noted last week, “we cannot treat gold as stable unless $1720 is overtaken with such a scenario once again eyeing the key Fibonacci congestions at $1735-$1738,” backed by the 61.8% retracement taken from the October decline at $1750. -MB