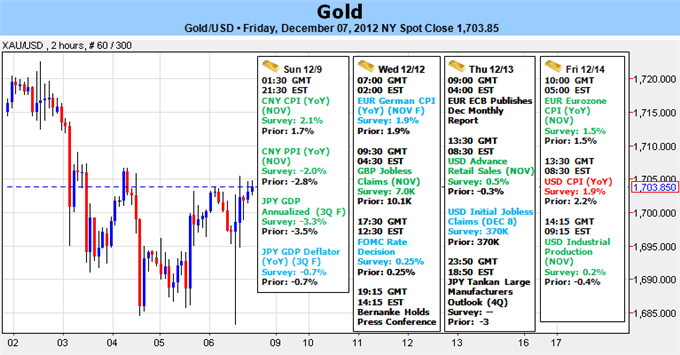 Gold was off by 0.64% this week with the precious metal closing at just shy of $1704 in New York on Friday. The move comes amid a volatile week filled with event risk as central bank decisions from Australia, New Zealand, Canada, the UK and the Eurozone kept traders on their toes. An interest cut from of the RBA, a downgrade Eurozone growth projections from of the ECB, a rather misleading and However, with gold posting its second weekly decline off the August highs, is the metal poised for further losses?

The November non-farm payroll report today crushed estimates with a print of 146K jobs and a 0.2% decline in unemployment bringing the rate to 7.7%. Although the headline figures look encouraging, a deeper look into the metrics revealed a downward revision of last month's 171K print to just 138K with discouraged workers leaving the work force accounting for a 350K contraction in the labor pool. While this is likely to have added artificial downward pressure on the unemployment rate, markets ran with the headlines after concerns over the impact of Hurricane Sandy had yielded rather low expectations for the print. Gold's immediate response saw prices plummet into the $1685 threshold before rebounding sharply back above $1700 and with continued sluggish growth in the labor market, expectations for further Fed easing could limit losses in the interim.

As we head into the close of 2012, all eyes now turn to the FOMC policy meeting on Wednesday as Chairman Bernanke and company release updated forecasts on interest rates, growth and inflation. With the end of operation twist approaching at year's end, there has been wide speculation that the central bank will look to implement additional non-standard measures in an effort to support the fragile recovery. As such, it's likely gold will hold weekly support as we head into the rate decision and although our bias is neutral we maintain a constructive approach above $1693 on a daily close basis. Should Bernanke cast an increasingly dovish tone on monetary policy, look for gold to push off this mark with a breach above the monthly high clearing the way for further advances.

Last week we noted that "while we cannot rule out another test of the 1693-1705 region, the broader prospects for gold remain constructive." Indeed the region did see a test this week with four consecutive attempts and failures to close below this key threshold. The rejection at this mark may offer some near-term support but we cannot treat gold as stable unless $1720 is overtaken with such a scenario once again eyeing the key Fibonacci congestions at $1735-$1738. A break below the November low-day close at $1685 exposes targets at $1673 (November low) and the 200-day moving average, currently at $1661. -MB