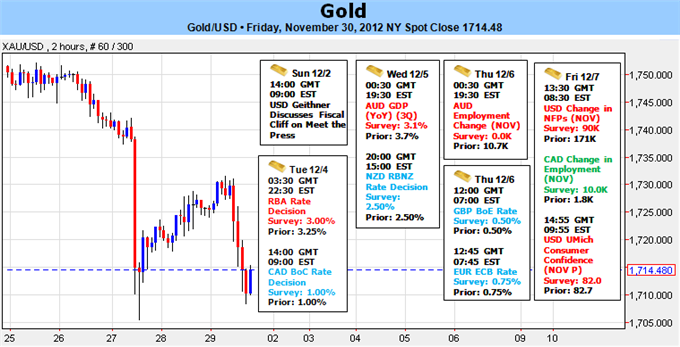 Gold was off by more than 2.1% this week with the precious metal closing at $1715 in New York on Friday. Prices had fallen more than 2% on Wednesday alone before closing the session down 1.28% with futures volumes hitting record highs early in the week. Immediately rumors circulated of an erroneous "fat fingered" trade after bullion plummeted $25 at the open of futures trade with Reuters reporting the "equivalent of more than 2 million ounces of COMEX gold futures changing hands in less than five minutes." The session was marked by massive swings in equity markets as investors reacted to developments out of Washington with the Dow coming back from a triple digit decline to close markedly higher on the session. The rebound in gold off the lows was satisfactory however, and while we cannot rule out another test of the 1693-1705 region, the broader prospects for gold remain constructive.

With the Fed pledging to maintain its accommodative stance on monetary policy for the foreseeable future, investors are likely to favor gold as a classic hedge against inflationary pressures and with the end of operation twist quickly approaching, the Fed may look to implement other non-standard measures which are unlikely to be sterilized in nature. That said, the Fiscal Cliff threat continues to drive price and could trigger further weakness as prices continue to loosely track equity markets on the downside. If concerns are put to rest before the year's end, bullion should remain well supported as broader commodities advance.

The Fiscal Cliff debate has continued to grip markets with remarks by various members of congress fueling volatility across asset classes. But with major event risk on tap next week, the negotiations are likely to be brushed aside until the deadlock is broken as investors look ahead to interest rate decisions from the RBA, BoE, ECB, RBNZ and the BoC. The flurry of central bank policy meetings lead up to the Labor Department's non-farm payrolls report on Friday where we will get an updated assessment on the state of the US employment sector. NFPs are expected to rise by just 93K for the month of November with the unemployment rate widely expected to hold at 7.9%. Due to the importance of next week's docket, we maintain a neutral stance here while highlighting key levels to watch for as we head into the first week of December trade.

From a technical standpoint gold has continued to trade within the confines of an ascending channel formation off the November lows with prices closing out the week just above channel support at $1714 after rebounding off the key 61.8% Fibonacci retracement taken from the October decline. A break below the this level risks a pullback into the $1695-$1705 support zone with only a compromise of this region invalidating the longer term gold outlook. Near-term resistance stands at the $1735-$1738 pivot zone where multiple longer-term Fibonacci extensions rest with a break above this mark challenging the monthly highs and our secondary objective at $1775 (our primary objective cited two weeks ago triggered last week at $1750). Note that daily RSI has continued to ho ld below the 50-mark with a close below 40 suggest in a deeper correction into figure may yet be at hand. With the start of the week and month holding so much event risk, the December opening range promises to be a telling one as we head into the close of 2012. -MB